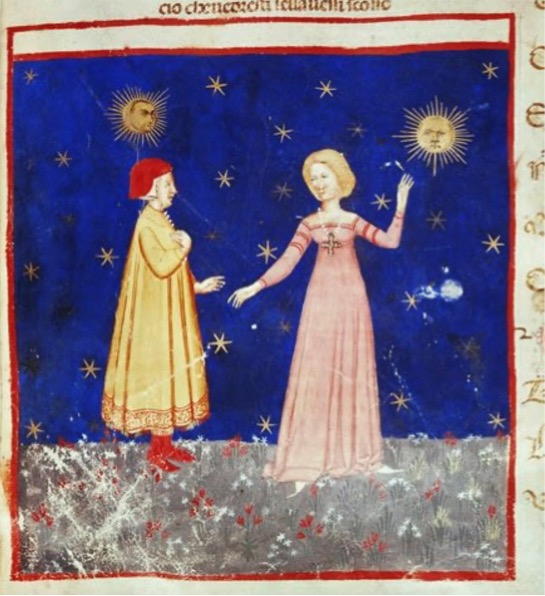 Dante and Beatrice from a 14th century manuscript.

Use this code, “dantemv”, to get £10 off my Divine Comedy course at The Idler via this link.

The year was 1274, May Day to be precise. The young lady Beatrice was walking the lovely streets of Florence and she approached a youth called Dante. She smiled. Instantly, he was besotted. Little did he know that this youthful infatuation was to shape the rest of his life. It literally took him to hell and back.

We can be glad it did. The flowering of his love was the masterpiece by which he is now best known: The Divine Comedy. His journey through hell, purgatory and paradise is many things: a critique and celebration of human qualities, a warning that this life matters, a path of awakening, an odyssey, a diatribe against the church and deadly political foes. But at the end of it all, Beatrice brings him to the spiritual climax called the Beatific Vision. He sees God.

That can happen because he had learnt to deal with the despair into which he had plummeted after their first meeting. They had already been promised to others, as was the way with medieval marriage, and so they were never going to be able to consummate any affection. And anyway, she died young, aged 24, in 1290.

From the earliest days, it was cast in a dim light, and not without some reason. Christianity emerged during the period of the Roman Empire, in which to be a freeman was largely defined by being able to do what you willed sexually, with your and others’ bodies. The early preachers of the new faith reacted against that liberty. The upshot was that any acts which smacked of sexual freedom were slapped down and condemned.

That said, there was always another tradition in the west that valued eros. It reaches back at least to Plato who argued that passionate love is enchanted. It is actually a go-between god, or daemon, who can upset, widen and transform your vision. Love is so powerful, and so readily goes wrong, because it yearns for nothing less than the good, the beautiful and the true.
Dante clearly felt the tension between the two attitudes towards eros in his life. His early poems describe the torture of sexual impulses. But he reached a turning point when he realised that the struggle could become a celebration. His poetry could describe not only the agony but the ecstasy.

That happened, slowly, as he coupled his instincts to his intellect, his body to his mind. Eros could marry Logos, which at the time meant the insight within us that can discern the presence of the divine. His love for Beatrice then became like a star in the sky: he could use his feelings to guide a broadening of his understanding. So long as he felt the light of love growing in his life, and so long as he felt his soul becoming less fixated and more capable of embracing existence, he knew he was on the right track.

His first gasp on the streets of Florence was not wrong. Though he became, initially, obsessed with Beatrice, he attained an ability to love not only her, and the way in which she mirrored the divine loveliness, but an ability to turn with love itself, which moves the sun and the other stars – to recall the line with which his poem ends.

The course that I’ve launched with The Idler is designed to introduce the Divine Comedy, fully aware that it can be daunting. You’ll see images, as well as learn what happened, and be introduced to its many possible meanings.

It is one of those texts that, once open, never stops bringing insights and treasures. Moreover, Dante was quite clear that he wrote his poem to help others along the same route to enlightenment. This year, 2021, is the 700th anniversary of Dante’s death, when he passed over into the light perpetual. He had used his love well. He urges us to do the same.