A canto by canto journey for Dante 2021 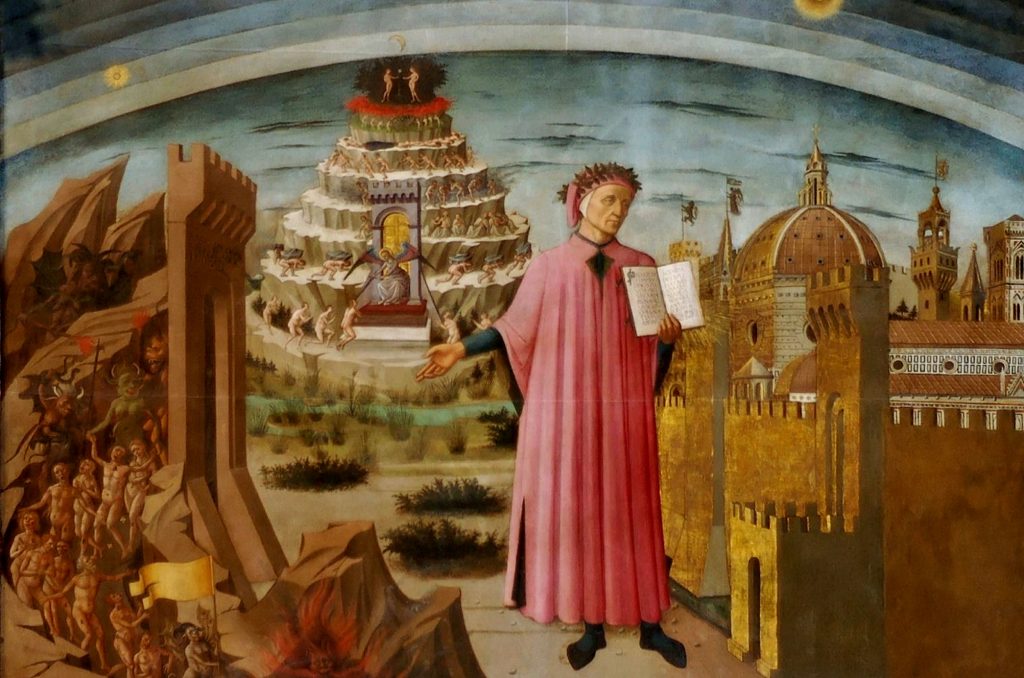 My new book, Dante’s Divine Comedy: A Guide For The Spiritual Journey, has just been published by Angelico Press for the 700th anniversary of Dante’s death in 2021.

This year, 2021, marks the 700th anniversary of the death of Dante, author of the great Divine Comedy. I invite you to experience the odyssey, by accompanying me as I discuss each canto.

Dante begins his journey by waking up in a dark wood. The air tastes bitter. He becomes fearful. Truth is out of reach. But his crisis is a turning point.

Many today, too, are waking up to something that’s gone wrong. We’re in a spiritual crisis. We must see the world afresh and understand. I believe Dante can help us discover how.

In addition to my new book, follow every step of the way on YouTube, via the films or MP3 below, or via the podcast, Dante’s Divine Comedy.

I recommend the translation by Mark Musa in the Penguin Classics edition, both for its accessibility and notes. Most of the images that accompany my discussion are by Priamo della Quercia, Giovanni di Paolo, Sandro Botticelli, Gustav Doré and William Blake.

Dante wavers and Virgil reveals why he is here. MP3 here.

Dante and Virgil enter the gates of hell to find lost souls and a river. MP3 here.

Virgil and Dante enter the second circle of hell and meet those whose love in life has trapped them. MP3 here.

In the third circle, they encounter Cerberus and the disfigured Caccio. MP3 here.

Virgil and Dante are in the fourth and fifth circles meeting those trapped by money and by anger. MP3 here.

Still in the fifth circle, they face the river Styx and the terror of Dis. MP3 here.

Terrified by the demons that block their path, Dante and Virgil wait. MP3 here.

Now inside Dis, they meet those who have followed their own way. MP3 here.

Descending a steep slope, they see the minotaur, centaurs and a river of boiling blood. MP3 here.

They enter an ugly wood filled with wailing and those who killed themselves. MP3 here.

By burning sands and falling fire, they speak with a soul cursing Jupiter and see a vision. MP3 here.

Walking alongside the red stream, avoiding the burning sands, a gaggle of souls approach them. MP3 here.

Approaching the cliffs of deeper hell, they confront the monster Geryon and souls disfigured by usury. MP3 here.

They are in the eighth circle, the place called Malebolge, as the descent deepens further. MP3 here.

Dante is perturbed when they encounter the diviners, an art he practices too. MP3 here.

They meet the demons of Malebranche. Virgil reckons he can outplay them. Dante does not. MP3 here.

They find themselves escorted by ten demons. Something has gone very wrong. MP3 here.

Virgil helps Dante climb from the sixth bolgia. They come to the seventh, a melee of serpents chasing souls. MP3 here.

They see even more terrible metamorphoses in the seventh bolgia and realise the serpents are human souls too. MP3 here.

The eight bolgia appears almost majestic until Dante understands how its souls are trapped in flames. MP3 here.

Dante and Virgil argue. The next bolgia is infected with the pestilence of denuded nature and humanity. MP3 here.

Minds and bodies themselves begin to disintegrate in souls driven rabid and feverish by playing god in life. MP3 here.

Virgil and Dante wander into a grey zone, hear an ominous horn, and encounter the terrible giants. MP3 here.

Dante and Virgil encounter Count Ugolino deeper in Cocytus, as well as the souls of the living dead. MP3 here.

The last canto of the Inferno sees Dante and Virgil face to face with Lucifer, before a surprising turnaround. MP3 here.

Virgil and Dante are in a world of freshness and hope, sunlight and stars, but also strangeness and novelty. MP3 here.

As the sun rises, an angel speeds towards them, bringing a friend and a tense sense of tremendous things. MP3 here.

Virgil is troubled. They encounter slowly moving souls, and search for an entry onto the mountain. MP3 here.

Virgil and Dante find the narrow path that leads up, and begin the climb. A break brings another group of souls. MP3 here.

At first distracted by the indolent, they encounter a new group of agitated souls, though keep their focus. MP3 here.

Virgil and Sordello embrace again, before Sordello explains they must find a safe place for the night. MP3 here.

In the lovely valley, angels and a serpent dramatically appear, though oddly no-one’s concerned. MP3 here.

In Purgatory proper, a zig-zagging path leads to a terrace of beautiful images and burdened souls. MP3 here.

With the souls carrying heavy burdens, Dante speaks with them. He learns about the gordian knot of pride. MP3 here.

Alleviated of the constrained vision that pride brings, an angel sweeps down and shows the way up. MP3 here.

Still with the reforming souls of the envious, the fall of an avaricious civilisation comes into view. MP3 here.

Encountering another angel of light, Virgil explains a way of limitless growth in life. Dante is rapt. MP3 here.

The midpoint of the Comedy. It’s filled with thoughts on love and, at the exact midpoint, the word itself. MP3 here.

The nature of love and its operation is developed, before a crowd of rushing souls run up behind them. MP3 here.

Dante has a second dream. It disturbs him as they make their way to the fourth terrace where souls mourn. MP3 here.

Dante speaks with another mourning soul and is led to lament the history that shaped his own life. MP3 here.

A transitional canto, Virgil and Dante meet the soul of Statius. The two pilgrims have become three. MP3 here.

Dante meets a friend from life, and it becomes clearer how their communing did and didn’t truly sustain him. MP3 here.

Dante and Forese continue to talk on the nature of desire and perception. They encounter another tree and angel. MP3 here.

Dante is bursting with questions. Virgil and Statius to describe the creation of our physical and subtle bodies. MP3 here.

Dante is before the flames that would render him capable of divine love. He pauses. He desires and fears. MP3 here.

Dante is before the flames. He hesitates. But he gathers his will, with the help of Virgil and the angels. MP3 here.

They are an enchanting, mysterious forest. A solitary lady approaches at Dante’s request. They converse. MP3 here.

He follows the enchanting lady when, with a flash of light, the most extraordinary vision begins. MP3 here.

Beatrice continues to berate Dante, until he collapses. Then, he’s carried through the Lethe and changes. MP3 here.

Dante is saved from momentary madness, before Beatrice leads him to a display of spiritual corruption. MP3 here.

Beatrice prophecies about the future for Dante and Christianity, and Dante is ready for the stars. MP3 here.

Dante’s intellect and desire, drawn by Beatrice, blessed by gods, enables him to rise into divine reality. MP3 here.

Dante warns that the journey into paradise is risky. Then, they arrive in the sphere of the Moon. MP3 here.

Dante is immersed in the state of mind that confuses reflection and reality as a soul appears, Piccarda. MP3 here.

Dante is dazzled by the seeming paradoxes of paradise. Beatrice shows how they are transcended. MP3 here.

Beatrice shows Dante something of the freedom to align our lives with divine life, prompting a dramatic change. MP3 here.

Dante presents a big history and, in this mercurial sphere, we are invited to peer beneath events. MP3 here.

Dante is dissatisfied with the account of the crucifixion. Beatrice leads him to a beautiful new vision. MP3 here.

Dante, in the reality of Venus, encounters a kingly soul and kindred spirit to explore love, diversity and unity. MP3 here.

They arrive in the heaven of the sun, the light most manifest to mortals, heralding divine light within. MP3 here.

Thomas Aquinas offers the life of Francis of Assisi to illuminate seeing the light of the Sun in this life. MP3 here.

Dante contemplates a double circle of light in the sun, as Dominic adds wisdom to the ascent of love. MP3 here.

Imagining the movement of the stars is preparation for the divine perception Dante sees in the sun. MP3 here.

Contemplating the divinisation of humanity and creation, Dante finds himself in the sphere of Mars. MP3 here.

In Mars, Dante meets his forebear Cacciaguida, who offers a vision of times more aligned with the divine. MP3 here.

The tragedy of Florence is rehearsed though, in heaven, a deeper love and life transcends even the worst. MP3 here.

Dante learns that he will face exile and, in the heaven of Mars, absorbs the virtues to say yes to it. MP3 here.

A deeper symmetry in life appears to Dante as, guided by Beatrice, he moves to the heaven of Jupiter. MP3 here.

Souls Dante never expected to see are encountered in Jupiter and Dante learns of a new heavenly dynamic. MP3 here.

Dante is in Saturn, though its glory must be shown gradually, lest he be blasted by the light. MP3 here.

In a series of shattering visions, Beatrice helps Dante steady himself and become capable of the light. MP3 here.

Dante must delight Saint Peter with insights on faith. He finds words to express his awareness and love. MP3 here.

The light of hope, James, joins Dante and Beatrice. They shine with this virtue, before the heavens fall silent. MP3 here.

A blinded Dante realigns his desire to the heavens, and is confronted by the unexpected light of Adam. MP3 here.

Dante is full of heaven’s abundance, when the lights around him turn red and Peter condemns the church. MP3 here.

Dante gains inner sight of the still centre of all things, the spark of being and ever present origin. MP3 here.

The unity of the eternal and temporal, as interpenetrating expressions of the divine, is unpacked by Beatrice. MP3 here.

Dante sees paradise as a white rose of beauty and heavenly amphitheatre of life, shining like the sun. MP3 here.

Bernard takes Dante on a tour of paradise, which is also a gathering together of all he has experienced. MP3 here.

Dante reaches the end that is the origin and moment of complete reception of divine life and light. MP3 here.