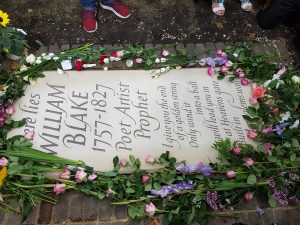 I wrote this piece for Christian Today, following the unveiling of the beautiful new gravestone for William Blake in Bunhill Fields.

On Sunday, hundreds of people gathered in a damp, London cemetery called Bunhill Fields for the unveiling of a gravestone. They’d heard about the event on the news or picked it up on social media. They were addressed by figures from the poet and priest, Malcolm Guite, to the heavy metal rock star, Bruce Dickinson. Together, they assembled to celebrate the prophetic life and witness of one man, William Blake.

Blake was buried in a common grave on the site when he died in 1827. The wooded land, near Old Street, was used for the interment of dissenters, and Blake’s views had shocked the establishment. “Prisons are built with stones of Law, Brothels with bricks of Religion,” he wrote in The Marriage of Heaven and Hell. But the exact location of his mortal remains was unclear, until 2006 when it was pinpointed by two fans.

Having verified the findings, the Blake Society raised the money needed to commemorate the poet properly. The ceremony and celebration took place on the 191st anniversary of his death.

It was an inspiring occasion and led me to wonder. What do people see in Blake? What do they seek from him?

Bruce Dickinson proclaimed that Blake was one of the “greatest living English poets, artists” – and he meant “living”. Blake never really dies, he added. He’s like Shakespeare or Dickens or Jane Austen.

There’s much about his uniqueness that draws people, too. A Blake print is instantly recognisable. He railed against the artistic conformity of his day, which is why he never made much money from his work. As a result, he’s become the patron saint of those engaged in the profound struggle to develop their own, distinctive voice.

Then there’s his politics. Blake loathed the soul-sapping “satanic mills” of the industrial age and wrote poems such as The Chimney Sweeper. It quietly excoriates the hypocrisy of a social morality that could send children up chimneys – clothing them “in clothes of death”, as Blake put it – whilst simultaneously parading into church, “to praise God & his Priest & King”.

Blake loved liberty, throwing off the “mind-forged manacles”. He was exuberant, kissing “the joy as it flies”. He was ethically fearless: “A Robin Red breast in a Cage, Puts all Heaven in a Rage.”

And he was also a visionary, and a Christian visionary at that. He conversed with angels, saw saints, experienced ecstasy and understood that he had a vocation, blessed by Christ. It was “to open the Eternal Worlds, to open the immortal Eyes Of Man.”

Malcolm Guite reminded the crowd of this side of Blake as he read lines from Blake’s epic poem, Jerusalem the Emanation of the Giant Albion. It declares what Blake saw to be the heart of Christianity. It’s not that we might be saved from the Fall, a notion that Blake believed was incompatible with the divine image to be found in all people. It’s not that we must adhere to creeds, or believe in the inerrancy of the Bible, which Blake felt took power from the Spirit alive in us and handed it to this-worldly, religious authorities.

Rather, Christianity is at heart an awakening, a realisation, a perception. Guite read out these words: “I know of no other Christianity and of no other Gospel than the liberty both of body & mind to exercise the Divine Arts of Imagination. Imagination the real & eternal World of which this Vegetable Universe is but a faint shadow & in which we shall live in our Eternal or Imaginative Bodies, when these Vegetable Mortal Bodies are no more.”

It’s Blake’s mysticism that draws people today, be they Christian, of other faiths, or none. He cuts across boundaries, he bridges worlds, because he focuses on direct knowledge of the divine. His life was driven by what he called his “visionary studies”, “that I may converse with my friends in Eternity, See Visions, Dream Dreams & prophecy & speak Parables”.

This is what people sense in him. They want it, too. He draws them because today’s establishment has reinvented the satanic mills and routinely ridicules people’s immortal eyes.

But, secretly, we know we are destined for eternal worlds. William Blake followed that way and, because we seek that way, people today go to see his new gravestone in a damp, London cemetery called Bunhill Fields.