The Flux of the Matter – new Idler column 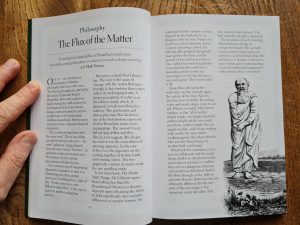 My column in the new Idler magazine, out now.

One of the best known comments in western philosophy has to do with rivers. The flowing thought was uttered by the ancient Ephesian hermit, Heraclitus. Born into a patrician family, during the sixth century BC, he despaired of the way human beings conduct themselves and so sought hope in the nonhuman vitalities around him. Watercourses must have been a favourite fount of inspiration.

“You would not step twice into the same river.” This is how Plato records the famous aphorism – “aphorism” being derived from the same root as “horizon”: an aphorism invites you to peer over the horizon of your current perceptions and detect more.

The common way of interpreting Heraclitus’ remark is to take it as illustrating one of his central doctrines: everything is in a state of flux. “In the same river ever different waters flow,” is the way he puts it in another saying that survives.
But notice a detail that I think is key. The river is the same. It changes with the waters that move through it, but contains those waters within its unchanging banks.

A deeper perception of reality is on Heraclitus’ mind which, if glimpsed, reveals something less ordinary. The psychiatrist and philosopher, Iain McGilchrist, is one of the best modern exponents of what Heraclitus invites us to contemplate.
The ancient Greek did not stop at flow and flux, McGilchrist suggests. His deeper fascination was the coincidence of seeming opposites. In the case of the river, the opposites are the coming together of its firm banks and running waters. The two apparently contrary dynamics make the one sparkling entity.

In his latest book, The Matter With Things, McGilchrist argues that nothing less than the flourishing of western civilisation depends upon relearning the ability to hold superficially irreconcilable differences in creative tension. He maintains that the modern world is plagued by the tendency to see things in only one way. Nature is a machine, not an organism; power is about exercising control, not offering gifts; progress and growth must govern decisions, not the pursuit of joy and transcendence. Our culture has rocketing abilities to manipulate the world and a fast-fading ability to find any meaning in it. Life has become a zero-sum game. The winner takes it all.

Heraclitus calls across the millennia, saying, consider again the nature of the river. Ask it to disclose more of reality. Its rushing water and steady verges come to our aid. What is revealed, McGilchrist explains, is that “all is neither simply single, nor simply manifold, neither simply whole, nor simply not whole, neither simply like or simply unalike, each thing working with, and by the same token working against, the others; that the One and the Many bring one another forth into being.”

What look like contraries can be seen to collaborate and the world shows itself to be structured not by rigid rules or enemies in conflict; that view is a dangerous delusion and murderous falsehood. Rather, life flows through cycles, held in polarities that are distinctive but not ultimately different, like the two ends of the one magnet. The mountain needs the valley. The skin separates and connects. The bird resists the air and so soars in it.

The awareness of such a moving, vibrant harmony brings an unexpected benefit. We can both remain a part of what’s going on around us, and stand back from the turbulence or delight, to discover a peace which passes understanding: a state of undefended engagement with existence that is composed though not detached, and so is capable of facing anything life or death might bring. The experience of living is transformed not because the inner calm separates itself from whatever is happening, but for precisely the opposite reason. What’s truly steady can embrace what’s gleefully transient, which means that the dark and the light can be accepted. The consumptive approach to surviving – “I want this, I don’t want that” – falls away, along with the anxiety, fear and dread.

Social and political ramifications follow, as well. Take modern science. People are inclined to treat the scientific approach as equating enlightenment with empirical proof and solid evidence. But if everything that comes our way is forced through the sieve of statistics and testing, whatever the science doesn’t detect will be ignored, if not actively discarded. A scientific civilisation is, therefore, at risk of relying on its powers of prediction and so tripping up when the unexpected happens; it believes it has the ability to understanding everything, given big enough budgets and fast enough computers, though grows increasingly endarkened as the subtler pulses and gentler spirits of the human psyche and world soul are ignored. What cannot be calculated cannot be comprehended, what cannot be modelled cannot be embraced, what cannot be measured cannot be understood, what cannot be manipulated cannot be brought into life-giving relation.

The river tells us more. It murmurs a warning about artificial intelligence, which is dangerous not only because AI narrows our take on life but because AI strives to remake the world according to the parameters it deploys. The river adds a hope – that facing tension can lead to a realisation that hate is transcended by love. The river continues with a thought on how letting go is lovelier than holding onto. The river even asks us to consider that our last breath may be the necessary exhalation before awakening to another mode of existence.

Little wonder that rivers are often thought to be personalities. In some countries, the personhood of mighty watercourses is being recognised by the awarding of legal rights, as if the flows of water are people. I think Heraclitus knew that rivers were not people but they are principles, powers and presences with their own characteristics and message.

They bring and they carry away. They manifest as trickles and inundations. They connect the chthonic source to the winding delta, which then merges with the unimaginable expanse of the sea. “We step and do not step into the same rivers, we are and we are not,” Heraclitus also mused. Such is the genius of life.