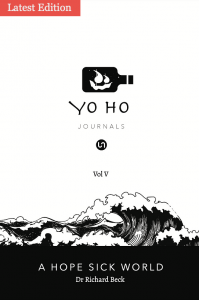 This is a response to an article by Richard Beck in the new YoHo Journal.

Richard Beck introduces us to “hope sickness”. And I agree: the world suffers from desperate delusions as to the nature of our story. However, I would advocate a slightly different antidote to this materialist poison.

What the dominant worldview can’t comprehend is that the purpose of mortal life is to die. And it really is dying, with the tremendous struggle and anxiety, passing and release, dying brings.

However, a materialist imaginary also fails to see that the path through dying does not end with death. Rather, death is the experience by which existence comes to be known as prior to non-existence. Life was, is and forever will be fundamental – “in the beginning”, as John’s gospel puts it. Death and life are asymmetrically joined. Therein lies hope.

To know this truth, saints and sages teach us to make dying a practice of life. “Every kindness is a little death,” observes William Blake, by which he means that acting for another undoes the habit of treating yourself as the centre, not for the reasons advanced by positive psychology, but because the decentring of kindnesses reveals the centre of all things, which is your and my actual centre.

Alternatively, Teresa of Ávila describes wanting to die, not because she was suicidal or masochistic, but because she had come to see dying as the goal of her daily life, the process by which the depths of her being reorientate around God, who is our true being.

Without this perception of death, a grave error takes hold. The goal of life morphs into trying to make heaven a place on earth. Only, earth cannot contain heaven, as the progressive ideologies of modernity insist, which is why our age is threatened by the consumption of the earth.

Similarly, it is a mistake to view the resurrection of Jesus as a crack in the cosmos, through which God enters. Rather, the resurrection is the moment in which the first disciples realised that the cosmos always is in God, much as life contains death, and that this is a fact which can only be fully appreciated and entirely trusted when death is embraced without reserve. Dying before you die reveals that the cosmos reflects and radiates heavenly life.

In his epic poems, Blake presents an account of this alternative story. The universe has a telos, for sure, but its end is not in cosmic or historical time. This age does, indeed, face the “long defeat” described by Tolkien, and it is wise not to smuggle in the false hope that history has a moral arc that bends towards justice. Rather, this world passes away, as we do. It does so as the transport to another realm, which is the one true realm. Blake called it, Eternity.

The purpose of mortal life is to become more capable of Eternity. We need to live and die, via kindnesses and the contemplation of death, because they enable us consciously to perceive life in all its fullness. The doors of perception must be cleansed, so that everything can appear as it is, infinite, as Blake famously put it. Deaths – big or little, the one at the end or those that occur every day – are the cleansing.

So, I’d say that death is the cure for hope sickness. The pressing question for the world today – and, I’d say, many Christians – is how to rediscover that death is pivotal to our telos.