The Veiling of Things. Rishi Sunak, William Blake and the Bhagavad Gita. 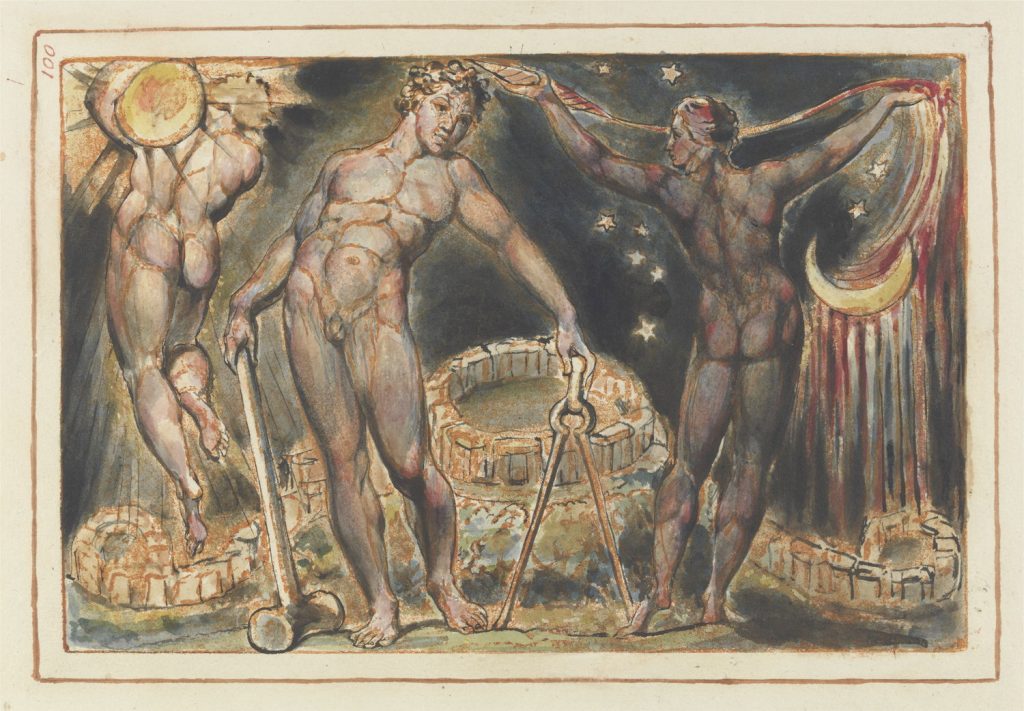 Los with his compasses and Vala with her veil. William Blake

The appointment of the UK’s latest Prime Minister has prompted much comment, not least because Rishi Sunak is Britain’s first Hindu leader. He was sworn in as an MP with his hand placed upon the Bhagavad Gita, not the Bible. His success is a conspicuous manifestation of the deep links that exist between Indian and English culture, which have been developing over centuries.

Just last month, the UK gained a new monarch as well, King Charles, and he, too, is profoundly indebted to Hinduism. His spiritual director was the poet Kathleen Raine. She was also a leading scholar of William Blake. And that link takes us back to the fascinating and, to my mind, invaluable absorption of religious insight from the Indian subcontinent.

Charles Wilkins was a founding member of The Asiatic Society. In 1784, the research body was created to further British understanding of India, in one of the more benign acts springing from the activities of the East India Company. Wilkins was the first translator into English of the Bhagavad Gita. He was also an acquaintance of William Blake.

In 1809, to celebrate the publication of the Gita in English, Blake drew a picture of Wilkins consulting Brahmins, a work that is now lost. And Blake had cause to be glad. The Gita was seminal in helping him to develop his perceptions of the dynamics of the human and cosmic mind, and so it played a crucial role in the recovery of the English mystical tradition, following the brutal assault on that aspect of Christianity during the Reformation.

The impact of the Gita can be detected all over Blake’s work. The name of the holy book itself is a sign, translatable as “the Lord’s Song”. Contemporaries reported that William was not only a gifted poet and artist but musician, as well. He could produce melodies seemingly at will and named his collection of poems accordingly: Songs of Innocence and Experience.

Alternatively, the rich pantheon of Blakean mythological figures, such as Urizen and Albion, are indebted to Hindu insights. Take the angel-morphic being called Vala. Vala is a presence closely associated with the natural world who has the capacity to veil human perception of the divine radiance shared by living creatures, places and stars. The name, Vala, might well draw from the Hindu concept of maya which describes the ways in which human beings become ignorant of their true, divine nature. That reality is veiled from them by maya: it appears that Blake substituted the “m” for a “v” to derive Vala, whom he calls baffling and deceptive, notes Shikha Shukla, who has written about the influence of the Gita on Blake and other English Romantics. Shukla goes on to conclude: “Blake is very close to the Hindus so far as this world view is concerned. Philosophically speaking, his attitude to the world is that of Vedantist, pure and simple.”

By Vedantist, she means that Blake knew the world to be primarily mind-like, not made of matter from which mind somehow miraculously springs. Blake was explicit: “Mental things alone are real and what is corporal, nobody knows Of its dwelling place,” he writes in the notebook published as A Vision of the Last Judgement. Nobody knows of the dwelling place of bodily things because all experience of embodiment comes to us only and always as a mental experience.

To put it another way, when Dr Johnson famously kicked a stone to refute the ideas of the philosopher, Bishop Berkeley, who was on the same page as Blake when it came to the insubstantial ground of things, the act actually proved Berkeley’s point. Johnson would have felt pain, an experience, and inferred the presence of a solid stone, though its presumed solidity depends entirely upon his perspective. Viewed over geological timescales, a stone is a remarkably soft and pliable entity.

What prevented Johnson from remembering that transience was his “selfhood”, as Blake put it – the strong sense that we are an isolated ego and so at risk in the cosmos. Which is why Blake prayed: “Annihilate the Selfhood in me!”

These insights mattered to him not only for personal reasons. Blake wanted all human beings to know themselves in their entirety. Nothing less than an individual’s happiness and a society’s wellbeing rests upon this knowledge. Our seeming bodies are really just an aspect of the totality of our being. “That called Body is a portion of Soul discerned by the five Senses, the chief inlets of Soul in this age,” Blake wrote in The Marriage of Heaven and Hell. The Gita would entirely agree.

The influence of India’s holy book is far-reaching. Take Coleridge’s poem, The Eolian Harp: “And what if all of animated nature / Be but organic Harps diversely fram’d, / That tremble into thought, as o’er them sweeps / Plastic and vast, one intellectual breeze / At once the Soul of each, and God of all?” Blake would have concurred: “I am in you and you in me, mutual in divine love,” Jesus tells Albion in Blake’s epic poem, Jerusalem.

Alternatively, and though the Gita features a mighty battle, Mahatma Gandhi concluded it taught nonviolence, or spiritual warfare. Blake, too, felt that human beings need to engage in “mental fight” and “wars of love”.

How far the Lord’s Song extends its influence over Rishi Sunak’s premiership remains to be seen. But given that turbulent times surround us, with difficult decisions to come, we might take comfort in the teaching found in both the Gita and Blake. As Blake put it: “Man was made for joy and woe, And when this we rightly know, Through the world we safely go.”