Of caves, consciousness, Christmas and light 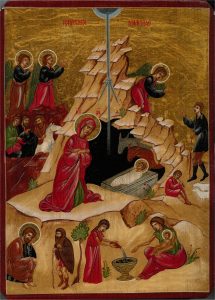 Imagine Christmas with Jesus born not in a stable but a cave. There are no angels and shepherds, kings and gifts, but instead the sheep in the fields, the birds in the air, and the clouds in the sky stand still, astonished. In fact, the whole earth is seen to pause for a moment. A midwife descends from a mountain. She is singing the song that is now called the Magnificat which is usually ascribed to Mary: “This day my soul is magnified.” Then, a bright cloud descends, dazzling everyone as Jesus appears.

This is the story that will be rehearsed by Christians in the Eastern Orthodox churches. The details come from a text that was popular in the first centuries of Christianity, though it didn’t make it into the New Testament, the Gospel of James, named after the brother of Jesus.

It shapes the Christmas of churches in the East because this nativity scene is also the one written on icons. These holy pictures, that are said to be windows from heaven, invariably show Mary in a cave under a mountain, attended by her women. The jagged rocks amongst which she rests are pierced by a burst of light from on high.

It’s an image replete with symbolism that, to my mind, the western world is in urgent need of because, at heart, it makes clear that Christmas is about a spiritual eruption. It’s about a transformation of everything from the inside out.

Take the setting, in a cave. Grottos and hillside fissures were powerful places in the Hellenistic world that profoundly shaped the Judaism into which Jesus was born. Plato had written about enlightenment as escaping from a cave. They were also regarded as secret spots that concentrate divine energy. Mystical rites were conducted within them. “Icons of the nativity depict this version of the event where the cave does indeed seem to be the focal point of cosmic energies,” writes Richard Temple in Icons and the Mystical Origins of Christianity.

Further details show other spiritual truths. The sheep, birds and clouds standing still suggest that, at that moment, the consciousness of the whole world focused on the tremendous occurrence. The bright light descended. Divine life from a higher realm was flowing into the dead wilderness and stone.

Incidentally, discussing the symbolism is not meant to imply that the details are not possibly historical. For example, Bethlehem is surrounded by mountains and habitable caves. Mary and Joseph could easily have found one. In fact, some historians have concluded that a cave is a more likely rest place than a stable.

But why might this spiritually loaded version of events matter today? It’s because we live in an age that struggles to see how natural events are divine manifestations. This has alienated us from the world in which we live and lies at the root of many of our problems.

Modern science, for all its numerous advantages, has distracted us from the sacred pulse that runs through the cosmos. It has reduced the living dynamic that ancient peoples called the Logos to mechanical laws of nature. We have eyes that barely see it, ears that barely hear it, and so mouths that rarely speak of it. It’s led to the odd situation in which the more we learn about the workings of the universe, the less we feel its meaning. 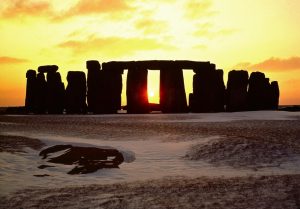 Some effort is being made to recover the older consciousness of things. Take gatherings at places like Stonehenge and Newgrange for the winter solstice. The low light and long shadows transform these ancient stone structures into both calendars and wombs. They can simultaneously mark the historical turning of annual cycles, and the symbolism of transitioning between death and life. The light fades to darkness so that darkness can be rekindled by light.

The philosophy of idling is a crucial part of regaining this spiritual sight, too, because pausing for a moment enables it – as the sheep, birds and clouds of the Eastern nativity discovered. It facilitates a different quality of attention. Learning to wonder reveals a kind of knowing that is only possible when marveling at things. It’s an act that can grasp inner meaning and see that nature is not a machine but a theophany. Parents feel something similar when, at the birth of a child, love awakens them to a relationship that they had scarcely thought possible.

“What is life if, full of care, We have no time to stand and stare.”, wrote the poet, W.H. Davies, insisting that “Beauty’s glance” is enriching.

When this higher vision is eclipsed, its power to penetrate to the root of contemporary problems diminishes, too. Climate change and material inequality and restless hearts are not fundamentally social issues. They are, at base, perceptual. Do we have eyes that can see, ears that can hear, and mouths that can speak of a different order of reality? Can we know it in our hearts and so realign our lives to it in a way that eases the anxiety, lessens the grasping, and lifts our eyes to wider horizons?

Christmas is about such spiritual rebirth, divine sight and knowing the incarnate spirit throughout the cosmos – even in the hard, hidden places. Its message is that we can awaken to new life. It’s born within us, much as the child was born in a secret cave. The way he showed is from darkness to light, from obscurity to sight, from death to life. It’s true because divine energy fills the entire universe. We can know it, with spiritual sight, today.