How To Read The Greatest Secret by Rhonda Byrne 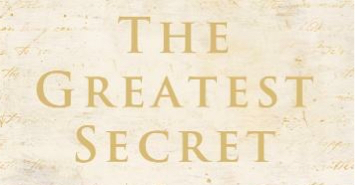 The Greatest Secret by Rhonda Byrne is released, and immediately looks like as much of a publishing success as its predecessor, The Secret. The 2006 book has sold 20 million copies.

So what do they have that is so immensely compelling? Is it the promise of an end to suffering and securing happiness? Is it the anthology-like format, in which every other paragraph is an inspiring quote? Is it the marketing, from the look and feel, to Byrne’s publicising savvy as a filmmaker?

Or could their secret be the truth?

To cut to the chase, my sense is that The Secret was a mishmash, but The Greatest Secret includes the pearl of great price. But, in an interesting twist, this truth repudiates the core teaching of the first book. So there is value in reading them both and teasing out the difference.

The Secret is a popular presentation of the so-called Law of Attraction. The idea, behind the positive thinking of New Thought, is that you get what you want. It is implicit in a thousand popular sayings, from “like with like together strike” to “be careful what you pray for”.

The Greatest Secret is different. It is a direct path.

Psychologists would call it cognitive bias, though the Law of Attraction is akin to methods recommended in clinical psychology as well. For example, Cognitive Behavioural Therapy and therapeutic mindfulness are more sophisticated forms, which Byrne incorporates into her books too. They add the practices of observing the negative thoughts that otherwise cloud life, and inquiring into their origins, so as to secure gradual nonattachment to them.

In wisdom traditions, these methods would be called a progressive path, as the benefits accrue with practice over time. The Greatest Secret is different. It is a direct path, meaning that the benefit can be instantly perceived.

This is the insight that underpins the great religions, for all that it takes on many forms, and is given various technical names, like Advaita Vedanta and Union with God. It finds all kinds of poetic expression as well, such as the Sufi focus on the “divine face”, or when Saint Augustine writes that God is closer to him than he is to himself. Dante called it spinning like a perfect wheel with the love that moves the sun and the others stars.

I think of it as the truth that your life and God’s life is one life. Human beings are able consciously to know it with the recognition that their everyday, humdrum ability meaningfully to say “I am”, rests on the initially less evident reality of the divine I AM. If it weren’t for the latter, the former would not be possible, which is why atheistic philosophies, like some forms of western Buddhism and Humean scepticism, deny the self. They miss that there is a ground of being across which transient thoughts move like waves traversing a sea, and so conclude that there is nothing but transient thoughts.

This “I” shines, bringing with it a quiet delight.

One of the best contemporary teachers of nondualism, to use another name, is Rupert Spira. He doesn’t often refer to God, but instead insists that only awareness is aware. Negatively, this is so as to foster disidentification with experiences in the mind or body because, contrary to what we inclined to assume, they are not the most basic truth about yourself. Positively, it fosters an awakening to the immediate, luminous knowledge of being conscious, regardless of what you may be conscious of.

Spira has described the awakening as often occurring over a number of stages. First is a realisation of the “I” that is the one constant of life. Second might be the sense that this “I” shines, bringing with it a quiet delight, source of peace, and steady compassion. A third might come with an appreciation that there is no “my I”, but rather that I-ness is shared within and by all beings.

William Blake knew this when he wrote of “Eternity’s sunrise”. The gloriousness of the sun’s rising orb can dislodge, in a jolt of beauty, the assumption that there’s an unbridgeable distance between oneself and everything else, alongside the corollaries of cosmic nihilism and personal isolation. The sun shines with the same light that consciousness shines! The upshot is that relationships with other people, creatures and things are not I to it, or even I to thou, but simply I. Everything is a reflection or refraction, more or less veiled, of the one presence. It’s most common, though controversial name is God.

It is a secret teaching not because it needs to be withheld but because it is readily misunderstood. Ego inflation is the obvious error, which in the great wisdom traditions is remedied by stressing the centrality of self-sacrifice. This is the inner movement that constantly receives and gives back, holding onto nothing, a dynamic that helps keep the person in the flow of life, as opposed to sustaining the delusion that life can be possessed or controlled. Blake called it “kissing the joy as it flies”. Indian philosophies call it nonattachment, meaning the art of actively, wisely and selflessly engaging in life.

This practice is not about attracting anything.

I labour the point because the theme of sacrifice, properly understood, is one way in which The Greatest Secret might repudiate The Secret. Byrne’s first book was ambivalent about possessions, though left the reader with the distinct impression that they should expect more of them. For example, the method she suggested back then took the form of three steps. First, imagine yourself having what you want. Second, feel yourself with it. Third, receive it. “Everything in the universe is magnetic and everything has a magnetic frequency,” Byrne explains in The Power, a book spinoff. So if you tune yourself to the right frequency, everything comes to you.

The method she suggests in The Greatest Secret is very different and, I presume, is borrowed directly from Spira. First, ask yourself: am I aware? Second, notice that quality of awareness. Third, stay with it, because therein lies the truth.
Notice that this practice is not about attracting anything because awareness cannot be lured or amplified, only recollected and recognised. It is also not about gaining further possessions, because it is already wholly possessed, as the gift of life.

In fact, to present it in any other way is to distort it, which is why, I feel, the two books sit uncomfortably alongside one another.

At best, you could say that The Secret offers a preliminary to The Greatest Secret: it stresses that thoughts and feelings matter. However, they don’t matter in the way The Secret presents them at all, where they are said to matter for what they deliver. Instead, in The Greatest Secret, they matter for what they are: momentary epiphenomena across the surface of awareness that come and can be let go of, in favour of awareness itself.

I suspect Byrne knows that The Greatest Secret offers a radically different understanding of life to The Secret. She talks about her long journey since the first book, though I am not sure she recognises that the new book implicitly judges the first to be shaped by a basic error, because at times, in the new book, it slips back in.

It is the state in which a person can know that all will be well.

For example, on one page she will stress that thoughts limit your life before, on another, arguing that thoughts create your life. Or, on one page she will explain that thoughts can manifest things in life, the old doctrine of The Secret, before on another page saying there is nothing that can be added to life, the truth of nondualism. Or again, Byrne continues to write about programming your mind with positive thoughts, whilst the direct path invites you simply to inquire into the unchanging, eternal nature of yourself, and see that it is unaffected by thoughts, positive or negative.

Further confusions spring from this double vision. Take healing. Physical healings are simultaneously celebrated as coming with knowing the old secret, when the truth is that awareness, strictly speaking, is indifferent to sickness or health. In fact, leaning into difficulties is a pathway to appreciating that there is always more to life. It is the state in which a person knows that all will be well, to quote Julian of Norwich (as Byrne does), because it is known that everything leads back to God and nothing separates us from the love of God, to quote Saint Paul, who also accepted that a thorn in his side was, actually, a blessing. This insight knows, too, that a death is a birth.

Byrne appears to oscillate between three convictions, in fact. The first is the Law of Attraction in its crude form, of manifesting what you want by drawing to yourself with the power of thought. The second is a cluster of insights, shared by ancient traditions and modern psychology, which range from the freedom of disidentifying with feelings, to the dissolution of traumatic experiences by carefully approaching them. Then, there is the third conviction and new element in The Greatest Secret, which is to know yourself as infinite awareness.

Return is life’s direction of travel.

Spira deploys a number of metaphors to explore it, some of which are anthologised in Byrne’s book. For example, he suggests realising that you are the station into which trains of thought come and go. Or, he suggests becoming aware of the screen upon which the movie of life plays. Or again, he will describe awareness as like waking up from a dream, an analogy that works because, in dreams, it seems as if the whole of life is there when, upon waking, we know that the dream was an expression or activity of awareness, limited by sleep. For much of her new book, Byrne is on the same page as Spira, until she says or implies the opposite: hop on the trains, make the movie, live the dream.

Sufi teachers often refer to the following Hadith: I was a hidden treasure and I longed to be known, so I created the world to be known. Return is life’s direction of travel, and the destination is no distance from us.

It is a hard subject to write about. One of Rupert Spira’s inspirations, Ramana Maharshi, preferred to remain silent, inviting followers into the presence, and talking only as concession. So it may be that reading The Greatest Secret against The Secret is revelatory. It is worth teasing out the differences because, in the gaps forged by the confusions, might come awareness of the timeless awareness that is always, already here.