Easter Sermon: How Dante teaches us the power of now 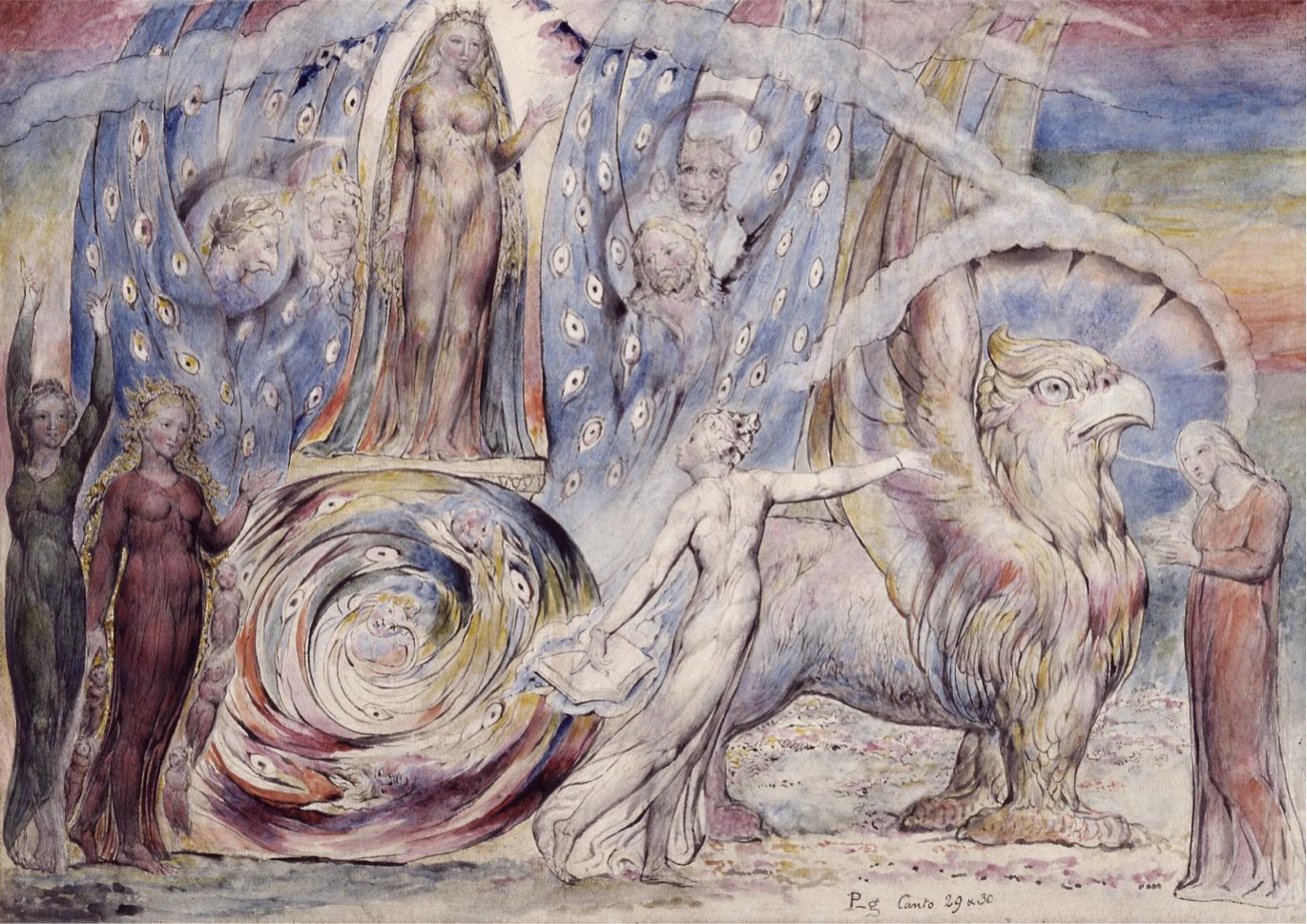 “Beatrice Addressing Dante From the Car” by William Blake, 1824

This piece is published by The Idler. (Use code, “dantemv”, to get £10 off my Divine Comedy course at The Idler and click here.)

If there were one big lesson that Dante learns as he struggles through hell and up Mount Purgatory it would be this. The present moment, right now, is the only moment that matters.

Now, I know what you’re thinking. “I’ve heard that one before, in a hundred self-help books and the podcasts I accidentally stumble upon before quickly flicking off. And anyway,” you might be adding: “Doesn’t meaning come with imagining a better tomorrow, and suffering cease with a healed past?”

So let me see if Dante can persuade you otherwise.

As he walks the darkening circles of hell to the frozen floor at the bottom, he meets souls who are gripped by the past and the future. They are preoccupied with what went wrong for them, who they might at some point avenge, how they can vent their rage, when they will curse life and God. It sounds extreme. It is.

Only, you then look out at the world and what makes it go round is antagonism, manipulation and a desperate need to secure tomorrow.

Dante lived during the early Renaissance, when Europeans were first sensing they might control life materially. His father was a wealthy merchant, an average guy made good. The mercantilism that was to become capitalism was taking off. The old taboos against usury were dissolving and his home town, Florence, had become a banking capital, as making money from money fostered the belief in potentially unlimited growth.

His poem is an extended comment on the tendencies taking root, which have now grown so as to almost wholly determine our lives.

Such a vision, and its associated obsessions, keep souls trapped in hells of their own making. Escape yesterday! Invest in tomorrow! The modern creed was written, and it rejects the present by forgetting life isn’t just more of the same, but better, stronger, faster.

Dante learns otherwise when he reaches the top of Mount Purgatory. Here, he discovers the Garden of Eden and, astonished by its beauty, reconnects with Beatrice, the woman who first stirred his love. It’s the week of Easter, 1300, and she appears in a glorious pageant. No artist has better caught the magic than Dante’s great illustrator, William Blake.

The encounter, in which angels sing and earth touches heaven, is also the moment in which Beatrice teaches Dante the power of now. And she does so with surprising, spectacular ferocity.

It turns out that he didn’t know about it before. “Why did you become fixated on me?” she cries! “Why did you discount your life before we met? Why did you bet on a happiness I could never deliver?” She points out that she died young, aged 24. Plague, violence and suffering were also a part of the everyday.

She continues her reproaches over two painful cantos. Dante looks down. He weeps. Eventually he faints. But there is meaning in her message.

This is the significance of free will. It is not a fantasy of unlimited choice. It is not an escape from what has shaped you, be that your genes, your upbringing or the stars. Rather, it is the ability to craft such constraints into fresh manifestations of your being, much as a composer works with a scale to create endlessly delightful music.

Further, this type of freedom is available in every instant of the waking day. If you tend to be hard-hearted, try softening. If you feel closed off, reach out. If you habitually go left, turn right.

The present then reveals itself to be boundless. It becomes the Eden in which earth channels heaven. “Time is the moving image of eternity,” was Plato’s way of putting it. “Hold Infinity in the palm of your hand. And Eternity in an hour,” was Blake’s.

Or as Jesus is reported to have said to Mary Magdalene, when she sees him resurrected on Easter Sunday, with a ferocity that somewhat echoes Beatrice: “Do not cling to me!” Do not try to pin me down, for fear of the future or the past. Instead, know transcendent life and step into the divine day, which Blake wonderfully called “Eternity’s sunrise”. It can be known here and now.

Oddly enough, I don’t think you have explicitly to believe in God or Christianity to know what Dante was driving at. Figures like James Joyce, whose imagination was shaped by the Florentine poet, and Clive James, who translated the Divine Comedy, have been great readers, too. What matters is a conviction that the present holds vitality.

It is easy to say and not always easy to know. But maybe Dante can help. He has, after all, been to hell as well as heaven. My course at The Idler is, I hope, a way into its tremendous verse. And also an exploration of its lessons, not least the potential of today, now, the present.