Tutankhamun’s spell and the lure of ancient Egypt

The artefacts of ancient Egypt fascinate because they touch a half forgotten experience of being in the world. Hieroglyphs do something similar. As Tutankhamun comes to London, what participation with life do they convey?

Susan Brind Morrow, a translator of the writings known as the Pyramid Texts, argues hieroglyphs are best read as poetry, in her book, The Silver Eye. They show rather than tell; are felt as much as heard. They are written in pictograms composed of daily objects, animals and plants that mirror life to an extent that abstract letters, such as our own, can’t match. We can only capture some sense of this mingling of the symbolic and material, Morrow suggests, in onomatopoeic words like “hubbub” or “ruckus” or “pepper”. These are words that perform what they’re about as well as saying what they’re about and, interestingly, are often Arabic in origin, which is to say that they are indirectly ancient Egyptian. 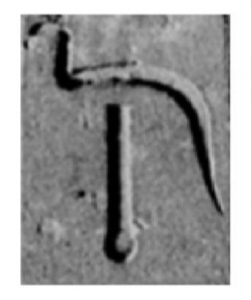 Consider the hieroglyph abbreviation for “say the words”. It’s written as a snake and a walking stick, with the stick below and pointing up at the snake. It’s a phrase that often comes at the beginning of lengthy texts to indicate that what follows should be uttered. Morrow shows how the snake-stick hieroglyph provides a good example of the ability to be simultaneously specific and evocative.

Consider first the snake part of the symbol. It would bring “life” to mind for ancient Egyptian priests and kings as the word for snake is also the word for life. Life was felt to be an inner snake, often linked to the snake-like spinal cord that winds and undulates inside, as well as to things that that can happen suddenly and unpredictably, like the rearing up of a cobra. Then, second, consider the walking stick. It introduces another set of associations. As an object it has to do with words because, in a land of sand, a stick readily doubles up as a writing implement. But also, when set beneath a snake and pointing at it, the stick recalls the snake handler, who dealt with the cobras that nested in houses by pulling them out as they wrapped around his stick. The stick attempts to tame the snake much as words might be said to attempt to tame life. Then, fourthly, there’s another link between the stick and the snake because a stick looks like an inert snake, and further, in some stories, comes to life by morphing into a snake, as when Aaron cast his stick before Pharaoh turning it into a serpent. The stick might attempt to tame the snake, but it can also itself come alarmingly to life.

The snake that is like life; that might be tamed by words written with a stick; that could itself spring to life; as the words that follow the snake-stick will if uttered, as the hieroglyph commands. In the pictogram, “say the words” is both an instruction and a talisman. Seeing it would bring the reader into the presence of what they were about to enact. Though different from the Paleolithic aurochs and bears, it’s another kind of psychosocial participation.

More generally, Morrow concludes that ancient Egyptians were not much interested in abstract questions of enquiry and explanation, and this explains why they never thought to abstract the letters of their language, but deployed hieroglyphs for 3000 years. She cites another translator, Alexandre Piankoff, who put it like this in his Wandering of the Soul: “For the Egyptians, every so-called physical fact of life had a symbolic meaning, and every symbolic act had a material background. Both were equally true and real.”

It’s what Owen Barfield called original participation and so hieroglyphs are a type of writing that is not about something, poised at a dispassionate distance from a subject. They, rather, contain something. They are embedded in the cosmos, in Ma’at.