A Secret History of Christianity 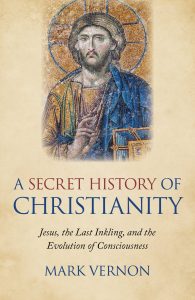 Jesus, the Last Inkling, and the Evolution of Consciousness

“Remarkable and timely.” Malcolm Guite
“This is a book I wish I had written.” Angela Tilby
“Urgent, thoughtful.” Gary Lachman
“Remarkable, thrilling.” Simon Conway Morris
“He lifts our eyes.” Nick Spencer
“An intriguing new perspective.” Rupert Sheldrake
“A fascinating study.” Mark Oakley
“What my grandfather called the taboo subject.” Owen A. Barfield
Review in the Church Times, “cannot afford to ignore”.
Review in the Journal of Inkling Studies, “imaginative engagement and rigorous testing”.
Review in the The TLS, “probing and psychologically subtle”.

Something is going wrong with Christianity. In the western world, it’s not hard to make the case that something’s gone terminally wrong. People are abandoning churches in their droves or, more commonly, simply steering clear of the services that nourished their forebears. In spite of sustained attempts to reverse the decline, and notable exceptions to the rule, nothing seems able to stop it.

This book is a response to the crisis, though it differs from others. It focuses on the inward aspect of Christianity’s troubles. It approaches the problem at a felt or mystical level.

The root issue, I believe, lies with how Christianity has come to be presented or, to be more precise, how religious Christians have come to misunderstand the message. What was once experienced as a pathway to more life has, today, morphed into a way of life that to outsiders seems self-evidently deluded, defensive or distorted. The almost limitless capacities of the human soul, which in the past have been articulated and explored by Christianity’s key exponents, as they have by the adepts of other traditions, have been largely forgotten by Christians today, and sometimes actively rejected. The upshot is that the working assumption of many western people is that Christianity will curtail your options, not expand your life, let alone affirm the truth about yourself. The people whom sociologists call “spiritual but not religious” and “nones” shrink from it.

It’s tragic and, in my view, most Christian apologetics haven’t really understood the nature of the problem. It’s why more evangelical writers try to sell or prove, not learn and grow. It’s why more liberal writers tend to cut Christianity back, feeling they must conform to, not test, contemporary secular assumptions. Both wings whittle away the secret sense of life to which the historical Jesus was clearly supremely alert.

By “secret,” I don’t mean a Dan Brownish reference to an occult code, let alone a conspiracy theory, but to a truth that seems obscure or hidden only because it’s tricky to grasp. It’s secret in the sense of being hard to see even when plainly spelt out. It’s secret in the way that a buried hoard is secret though is, in truth, simply resting beneath your feet, waiting to be found. It’s a perception that can be known like the quiet constancy of your breath. It’s that your life springs from God’s life and that this truth is yours to be discovered. It can be known directly, not on the basis of someone else’s report, someone else’s authority, someone else’s rhetoric, but inwardly and reliably – though it’s the work of a lifetime fully to align with it.

This is, in fact, standard mystical theology. It follows from the discernment that God is not another being, like you and me, but is the ground of being itself. God is known implicitly as the poetry in the poem, the fire in the equations, the life in the living, the pulse of the cosmos. And it’s a truth that must be inhabited to be understood.

The situation has become critical for Christianity because over the last four or five hundred years churches have been losing touch with this inner element, which is crucial for any path that would call itself spiritual. That’s happened for various reasons – the rise of science, the impact of the Reformation, the separation of psychology from spirituality. Nonetheless, it is possible to rediscover. Like the goodly pearl of great value, it’s waiting to be uncovered.

I was lucky enough to find a guide in this task. He’s the Oxford Inkling, Owen Barfield. He is sometimes known as the “last Inkling” because he was the last of the celebrated group to die, in 1997. A close friend of C.S. Lewis and J.R.R Tolkien, they both thought he had the most penetrating ideas. However, he wasn’t as good a writer, particularly when it comes to blockbuster fiction, and so is not nearly so well known. That said, his core idea is readily understood, and radical. He has an account of our spiritual predicament that is illuminating.

It arose from a discovery. Barfield realized that the human experience of life shifts fundamentally over periods of cultural time. Our awareness of things evolves. Our consciousness changes dramatically across history.

He proposed that it happens in three phases. The first, he called “original participation” – the word “participation” referring to the felt experience of participating in life. Original participation dominates when there is little distinction between what’s felt to be inside someone and what’s outside because the boundaries of individual self-consciousness, which today we take for granted, are not in place. Life is therefore lived at the level of the collective. It’s experienced as a continuous flow of vitality between what is “me” and “not me,” between mortals and immortals, between past and present, and also between other creatures and the human creature. The inner life of the cosmos is the inner life of the people. “Early man did not observe nature in our detached way,” Barfield writes. “He participated mentally and physically in her inner and outer processes.”

It determined life in ancient times and can sometimes be glimpsed today. It’s in the waves of emotion that sweep across a crowd as, then, there’s a temporary dissolution of the boundaries between the individual and others. It’s an experience that’s akin to stepping back in time.

A second phase away from original participation is marked by what he called a “withdrawal of participation.” It happens when there’s a shift from the sense of being immersed in the life of others, nature and the gods. An awareness of separation, even isolation, is felt. A person will begin to sense that they have an inner life that is, relatively speaking, their own.

Barfield argued that a momentous withdrawal of participation began to unfold in the middle of the first millennium BCE. It’s the period during which quasi-scientific ideas about the cosmos began to be formed. Some humans turned away from an exclusive reliance on myths as their interests changed from sharing in life to explaining life. Questions such as the meaning of life started to appear because meaning no longer spontaneously revealed itself to such enquirers.

It was a troubling time, though, with the withdrawal of participation came an astonishing gain. The concentration of inner life that the separation from outer life brought came hand in hand with an intensification of the sense of being an individual, and with that came all manner of novel possibilities. Moral responsibility emerged, as did new relationships with deities. In the West, this moment is identified with the birth of philosophy in ancient Greece and the emergence of new religious imperatives from the Hebrew prophets. (I’m going to focus on these developments from a western perspective, though a comparable story could be told of the East.)

It’s a time of awakening and rebirth and results in what Barfield called “reciprocal participation,” a third phase. Now, the inner life of the individual is felt to belong to him- or herself – the gain of the withdrawal – but also to reflect the inner life of nature, the cosmos and of God. The individual has a soul that is not cut off; an interiority that can reflect and reflect on life and its meaning. People of this age have a subjectivity that can forge purposes and intentions. The awareness of participating in life still involves shared rites and ceremonies, but ideally these will be undertaken freely and consensually, not simply because a priest or a king demands it. Inwardness as we can know it is born.