The church and God as father 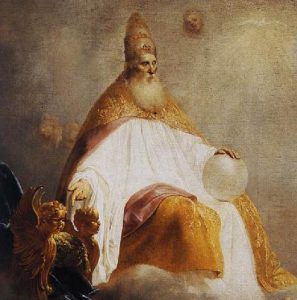 A talk given this morning on Weekend, BBC World Service. Do have a listen, or read.

The Christian image of God as a male heavenly father runs deep. It dominates the way the church relates to God, which is why it’s not very convincing when bishops and archbishops tell us that they don’t really believe God is a bearded man on high after all.

It’s true that Jesus calls God “father” in the Bible. What’s forgotten, though, is that he was referencing a Jewish idiom, common at the time. It went, “As a son knows a father”, and was an expression of familiarity. On rare occasions, Jesus also used the Aramaic word “abba” meaning father. It’s a respectful title, a bit like “teacher”.

It was only when the early church developed into a hierarchy, recruiting men who were often the local landlords and magistrates, that God as the top man really set in the imagination. Church structures were paternalistic and that fed the assumptions of Christians. If a man dressed in fine clothes is said to represent God, then it’s hard to imagine God as other than a man dressed in fine clothes.

To this day, clergy clothed in patriarchal garments dominate the religious experiences offered by the church. Bishops dress in the imperial purple of the Roman emperor, sit on thrones during services, and receive deference from congregations like an old style paterfamilias. The introduction of women bishops has made little or no difference.

The upshot is that when an archbishop says, “God is not a Father,” it’s as if the faithful reply: “Of course, father. You’re absolutely right, father.”

The truth is that church-goers are treated as child-like and dependent. We have to receive forgiveness and blessings from priests, sit through sermons in serried ranks as if in a classroom, and accept implicit cautions against coming of age ourselves lest we fall into error – or worse still, realise we don’t need the ministrations of the church.

Only, this is precisely what people are realising, at least in much of the western world. The so-called “spiritual but not religious” are often those who reject the implication that God is a man. They also reject an organization that is so heavily invested in preserving the paternal image.

The Spirit blows where it wills, the Bible also says, deploying a strikingly different sense of divinity. But church leaders find the implied heavenly freedom unsettling. So long as that lasts, the projection of God as a male father-figure will dominate.