Nice and Easy does it. Thoughts on Zeno’s paradoxes 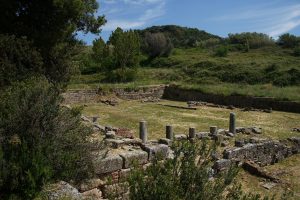 My new column in the Idler magazine.

Have you heard why the fastest never catch up with the slowest, why the amblers always outpace the sprinters? The reason for this counterintuitive conclusion is one of the oldest proofs in philosophy, drawn up Zeno. The argument as to why going slow is best can be put like this.

Imagine a speedy figure called Achilles. Known as a runner, he presumes that overtaking the leisurely tortoise, who is plodding somewhere ahead of him, will be a straightforward matter.

In short, what Achilles hasn’t reckoned is that he must catch up with the tortoise an infinite number of times. So Zeno concludes, Achilles may close in on, but never reach, the slowpoke.

The philosopher lived during the 5th century BCE, in the southern Italian village of Elea. Known today as Velia, it is a lovely place to visit, known for its crumbling Greek temples. The monuments rest on grassy undulations, exuding the peace of deep history. They are going nowhere fast too.

When I visited the charming spot a few years back, I had to walk the last couple of miles to the ancient site. The modern village, and the train station, have shifted location over the millennia. But let us get back to poor struggling Achilles. What is the problem he faces that Zeno so puzzlingly exposes?

The philosopher offered another tale that expands the conundrum. Consider an arrow in flight. At one moment, it is at one position in space. Agreed. Then, in the next moment, it is at a second position in space. Of course. However, it will need a third moment to get from the first to the second, and that moment doesn’t exist, for the same reason that the number three cannot be smuggled in between the numbers one and two. Ergo, the arrow doesn’t move from position one to position two, but simply stands still in space. It doesn’t fly.

The two riddles, and more, are known as Zeno’s paradoxes. As you might expect, their odd conclusions have been disputed by philosophers ever since.

An early interlocutor was Aristotle. He didn’t like the arguments and thought they rested on a mistake that leads to an ambiguity. It is true, Aristotle agreed, that the rational mind can cut time into distinct moments, and divide distances. But that is not to say reality is packed with an infinite number of such splits.

One of Zeno’s most recent interpreters, Iain McGilchrist, takes a different line. He loves the paradoxes for exposing the excesses of reason. In his book, The Matter With Things, McGilchrist argues that Zeno created enigmas to show that if you treat reality analytically, the analysis will lose touch with the reality it purports to grasp.

It’s a bit like making a map of a territory and so loving the map that you stop looking at the territory. The upshot is like the driver who robotically obeys the GPS. That works fine, until it doesn’t.

McGilchrist takes Zeno as a warning for a hyper-rational age, like ours. If you stick only to logic, statistics and evidence, then reality will escape you. You’ll start saying things like Achilles can’t capture the tortoise, or the arrow doesn’t fly – or colours don’t exist because they’re really just different wavelengths of light; or consciousness is a mirage because the brain is no more than a computer built of neurons.

A world of pure utility follows, driven by the merciless logic of efficiency, because what’s good, beautiful and true, doesn’t register in the metrics.

Zeno himself said that he sought to demonstrate the insights of his master, Parmenides. The two journeyed to Athens one year, Plato tells us, for the festival of the Great Panathenaea. Parmenides was old, looking every inch the sage, with distinguished white hair. Zeno was in the prime of adulthood, tall and handsome. Both were convinced that, at heart, reality is one. Any perceived differences between things, be that across time or space, are delusions. This is what the puzzles show because the conundrums arise from trying to break reality down.

Socrates was said to have been entranced by these thoughts. He congratulated Parmenides for his vision. He congratulated Zeno for expressing what Parmenides had conveyed in a poem, parts of which survive to this day: “One story, one road, now is left: that it is. And on this there are signs aplenty that, being, it is ungenerated and indestructible, whole, of one kind and unwavering, and complete. Nor was it ever, nor will it be, since now it is, all together one, continuous.”

Parmenides and Zeno were expressing an intuition which, though at first seems unlikely, will reveal itself to be true, if you contemplate life carefully. The end is the beginning. The arrival is the starting point. Each moment can be appreciated as if it were the only moment.

The philosophy is perennial, in part because, unlike racing Achilles and the darting arrow, it offers an experience of stillness and peace. The philosophy is humane because, unlike the denials of reason and the demands of utility, it offers a vision of reality which can be loved because it is lovely. Side with the tortoise. Amble. Know inner peace.