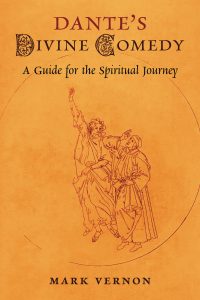 Available at US Amazon

My series of Dante vlogs

A Guide For The Spiritual Journey

Praise
“There has long been a need for a scholarly but deft guide to Dante’s masterpiece, not just as a literary curiosity, but as a profound examination of the meaning of life in a world less material than ours. Here at last is one for which we can be grateful.” Iain McGilchrist

“This is not just a description of what happens and who we meet, it’s an invitation to read The Divine Comedy as a way to change our own consciousness and embrace a more spacious reality: everything is bigger on the inside. I started highlighting sentences I wanted to think about, but ended up with yellow stripes everywhere: there are insights on every page. A marvellous book that blew away a lot of my assumptions.” Susanna Clarke

“We scarcely remember how to see poetry—or any of the arts—as belonging to a fuller vision of reality, with spiritual as well as purely aesthetic dimensions. This is an unfortunate state of affairs in regard to any literary text of consequence, but in regard to a work of the magnitude and splendor of The Divine Comedy it is tragic. An approach like Mark Vernon’s is precisely the remedy required if one wants truly to see the poem for what it is, and to see through the poem to what it adumbrates.” David Bentley Hart

“Mark is a wise, warm and humane guide through Dante’s hell, purgatory and paradise. His remarkable book reveals The Divine Comedy as a transformative reading experience, as urgent and relevant today as it was 700 years ago, perhaps even more so.” Henry Eliot

“Mark Vernon guides us through the great poem, giving light, gathering insights from other commentators, and granting us a sensitive, fresh perspective. Whether the Comedy is a familiar favourite or forbiddingly foreign, readers will here find companionship, nourishment, and assistance as they traverse the Dantean soul-scape.” Michael Ward

The Divine Comedy changes lives. Readers of Dante Alighieri’s masterpiece have found so ever since copies began circulating, in the early fourteenth century. However, there have also always been readers left unsure how to reckon with its genius. This is the challenge of labyrinthine texts that can reveal more of life each time they are read, once a way into them is found.

That difficulty is compounded today because most contemporary commentaries, introductions, and translations of Dante are not interested in the Divine Comedy as a work that catalyzes spiritual transformation. Similarly, it is relatively common for the Inferno to be celebrated, and for the Purgatorio to be respected, but for the Paradiso to be declared redundant, notwithstanding its tremendous displays of literary inventiveness when it comes to portraying light and love. The upshot is that it is easy to find guides to the brilliance of Dante’s poetry, the history of his turbulent times, and the significance of his theological innovations. It is hard to find a companion to the journey as a revelation.

And yet Dante himself was adamant that his poem should lead people to perceptions of the divine comparable to his own. He felt charged by heaven to write so as to open hearts and minds to the most basic truth of existence: that our lives and God’s life is one life. I hope to help rectify the contemporary dearth by following Dante’s advice, which is to track his every step, to feel into each encounter, to ponder his insights and allusions, and thereby descend and ascend with him. His book changed my life when, at least in some measure, I realized what he might be asking of me. I hope to share that here.

This book can be read on its own, as a narrative retelling and interpretation of Dante’s journey, or as a commentary that maintains a focus on what is happening to him as he travels, first with Virgil, down the circles of the Inferno and up the terraces of Mount Purgatory, and then with Beatrice, through the heavens of the Paradiso. To use the interpretative schema that Dante suggested: my aim is to stay not only with the literal meaning of the poem, which looks at who he meets and how he captures the encounters in wonderful verse; or with an allegorical reading of the text, which is drawn to the moral implications and religious meaning of the pilgrimage. Additionally, it is actively to seek out the revolutionarily transformations that happen along the way, and the manner in which he describes these perceptual shifts. I am fascinated by how Dante undergoes a process of realization, which is described by the technical term tropological, after the Greek word, tropos, or turn. Such changes require an unflinching and, at times, brutal assessment of his life and times, though only so as to discover the ever-present origin that draws him back to itself.

This way of reading the Divine Comedy is crucial for understanding its full significance. The journey is not a Grand Tour of reality, from fiery Inferno to blazing Empyrean, but a total reformation of Dante’s ability to know reality, and thereby experience the fulness of its being, without reserve. It’s why I think the considered implication of the epic is that Christianity is a universal creed: it reveals that God wills all people to be saved by coming to knowledge of the truth, to recall the words of the First Letter to Timothy in the New Testament. At first, Dante descends into hell presuming that poor moral conduct condemns souls to its dark alleys and inventive tortures, but he gradually realizes that actively participating in God’s life is about being free, desirous, comprehending, and aware: in short, having all that we are consciously aligned with all that God is. Ultimately, nothing can separate people from the divine, because that would be to fall out of existence altogether and, conversely, awakening to the fulness of divine life is a matter of complete perception, not perfected behavior. That’s our destiny: Dante invites his readers to learn its wisdom and truth.

The year 2021 marks the 700th anniversary of Dante’s death in 1321, a year after he completed the Paradiso. The poem is many things: a critique and celebration of human qualities, a warning that this life matters, a path of awakening, an odyssey, a diatribe against the church and deadly political foes. But it was born of a crisis. Dante begins his journey when waking up in a dark wood. The air tastes bitter. He is fearful. The way forward is utterly obscure.

His predicament resonates with where we find ourselves now, in the middle of various emergencies, a spiritual crisis underlying them all, in my view. Individually and collectively, we must see the world afresh and find ways to re-orientate ourselves. Alongside other inspired texts, Dante can help us discover how. He called his epic the Commedia, meaning a story with a good ending, for a reason.

One figure in particular has helped me: Owen Barfield. He was one of the Oxford Inklings, and greatly inspired C.S. Lewis and J.R.R. Tolkien. Lewis drew on Dante not only in individual books like The Great Divorce, but right across the Narnia stories, structuring them according to the realms of the seven heavens Dante traverses in the Paradiso. Another from the group, Charles Williams, advanced an understanding of Beatrice illuminated by his romantic theology, and I think Barfield’s insights can help too. They cast fresh light on the inner workings of the Divine Comedy. I pick this up as the cantos unfold.

Dante was a realist about his vision. He knew it to be authentic, not in the limited sense that Christianity is the one true religion, but in the sense understood by all great visionaries: their path is one path to the common goal of human life. It demands all that we are, and promises all that we can be. Improbable though it seems when we are caught in the thickets, our origin and end is in the love that moves the Sun and the other stars.