Beyond Flatland – the talks and a report 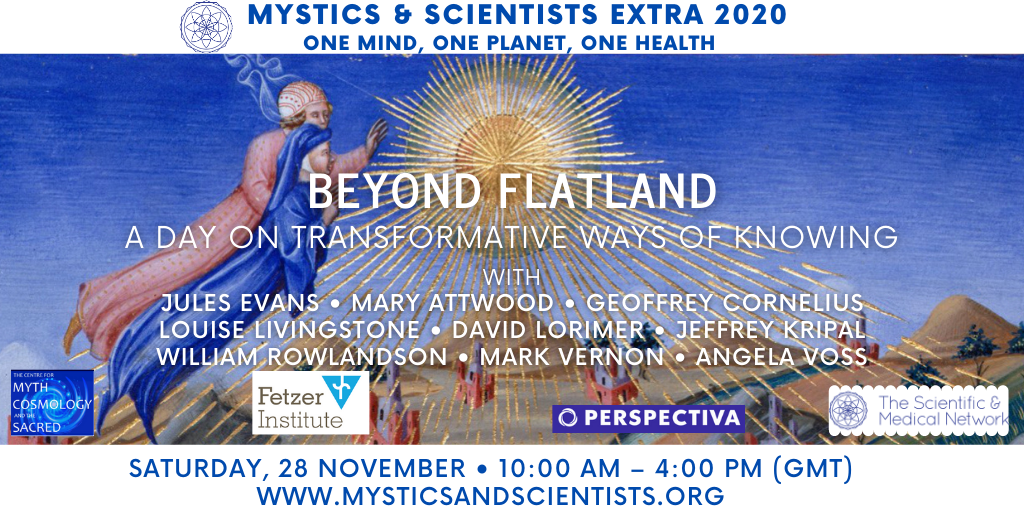 Beyond Flatland, A Day on Transformative Ways of Knowing, was on Saturday 28th November 2020.

Full details of the idea for the day, the programme and recordings of the talks are online.

This is a report of the day written by Nicholas Colloff.

Edwin Abbott’s satirical novella, which gave this day its title, imagines the perplexities of a square as it visits a one-dimensional world and is visited from a three dimensional one, being misunderstood and misunderstanding in turn. Abbott’s principal aim was social satire but, in the process, raised profound issues about how we construct our realities and what happens when those constructs are broken into by new levels of experience, presaging other worlds, other possibilities.

The Network exists because it speculates that our present world is trapped betwixt a dated, ‘knowing’ scientific materialism and patterns of religion that feel socially performative at best, assertively fundamentalist at worst, is indeed flat, two dimensional and needs to be reimagined.

Reimagined is precisely the right word because underlying this day’s explorations was the wager that imagination itself is a key pathway into truth; and, that its diligent, informed practice can unveil, to quote, Owen Barfield, ‘the inside of the whole world, a world that is animated, multi-dimensional, profoundly interconnected; and, in which consciousness may not simply be an emergent epiphenomenon but constitutive of the reality that we know.

This imaginative, spiritual journey is both uplifting, revealing, and yet challenging. The truth may have to be withstood as well as understood. We may have to breakdown as well as breakthrough. It carries not only a personal charge but a social one as well. If we are to navigate our present multiple crises, we need a new lens through which to see, new paradigms with which to work.

Where to go for inspiration?

First, as with the Renaissance, we might step back in time and revive a traditional way of interpreting the world that is rooted in wonder, acknowledges our sense of another world, enfolded in this one, that sees knowledge as leading from a marriage of sense, heart, and mind and which, as Angela Voss, ably articulated was rooted in a fourfold hermeneutical process that emerges from the neo-Platonic tradition of Proclus and was baptized by Origen.

In this, we move from the literal to the allegorical to the moral and finally the mystical or contemplative forms of knowing. It is not a linear process but a circular one and one that moves from what we appropriate through fact and association to the moment when what we study comes alive and begins to question us, realizing that no knowledge is real until it lives and changes our being. Thus, the heart, for example, is a physical organ with increasingly recognized neural qualities, that can be allegorized as a sign of love, that can speak to us of courage prompting moral change; and, that, as the sacred heart, is a living being that steps towards us and asks us, like Rilke’s Torso of Apollo, to transform our lives by, in this case, dwelling in the heart the Christ in each other.

This approach was amplified in David Lorimer’s presentation reminding us that this knowledge is not simply self-knowledge, it transforms our ontological view. The world is a place not simply to be appropriated, grasped but one that is alive, has its own purposes in which we are invited to dwell, quoting, as he did, Eckhart to effect: “The eye with which I see God is the same eye with which God sees me’’; and, if we came to see through God’s eye, we would recognize the deeper urgency of reconnecting, renewing and regenerating the world that is gifted to us.

The day proceeded then with Mary Attwood, Geoffrey Cornelius, and Louise Livingstone inviting us to practice these four dimensions of understanding with regard to a painting, Leonardo da Vinci’s ‘The Virgin of the Rocks’ (in the National Gallery in London), through the practice of inductive divination with a principal focus on the I Ching and a contemporary reworking of a Goethean approach to scientific understanding attentive, in this case, to a particular maple tree in the full flame of autumn.

Each of these pathways has at its heart a way of inviting a sacred other into our practiced reality, allowing a moment of turning when we the addresser become the addressee when we are invited to participate more fully in reality in full awareness of our responsibility towards it, with it. They are ways of knowing, as with divination, that can be playful and practical but always must be approached in awareness and humility. We must ask with care and be careful what we ask for!

With these illuminating and beautifully presented, groundings in imaginative ways of knowing, in the afternoon we turned to anomalous experience and with Jules Evans and William Rowlandson in dialogue visited the neglected figure of F.H. Myers. Myers, a classicist, and inspector of schools was one of the founders of the Society for Psychical Research and author of the monumental, ‘Human Personality and its Survival of Bodily Death’ that exhaustively charts his and others’ empirical, scientific exploration of ‘paranormal’ phenomena by which he sought to demonstrate that the mind does indeed exceed the brain, such mental attributes as telepathy are real; and, that we are open to the ‘cosmopathic’ – open to accessing supernormal knowledge. All of this in service to an evolutionary purpose, a new dispensation of being human able to guide its evolution; and, in acknowledging consciousness as an inherent quality of the universe, so Rowlandson suggested, paving the way to an ethic that reflects a profound respect for all things, woven together as we are in a shared community of consciousness.

But there is a snag! Myers assumed that by now this new paradigm, buttressed by this empirical approach to the spirit, would have banished both scientific materialism and dogmatic religion. The paradigm would have changed and, as we can see, it has not, we continue to live in Flatland.

This brought us to the final contribution a conversation with Jeffrey Kripal whose work in comparative religion and the humanities more widely has increasingly focused on the ‘paranormal’ and the breakthrough that can occur when anomalous experience ‘flips’ our lives (or, more generally perhaps in most cases, nudges them along)!

Kripal acknowledged that whilst progress is being made partly by science recognizing what it is failing to explain and by the sheer volume and commonality of people’s anomalous experience, there is a countervailing conservatism especially in the ‘’academy’’: too weighted perhaps on the side of critical deconstruction; and, too ambivalent about ‘cosmopathic’ elaboration and personal transformation. In response, we need to help people ‘come out’ having smart conversations with smart people about what they have experienced; encourage people to fall out of belief in belief, to suspend judgment and let the phenomena speak, being aware that they can bring unsettling terror as well as light. Meanwhile whilst taking inspiration from the past, looking to the future. Do not assume the future will simply confirm the past. It is a great unknown and may surprise us. Above all do not try to make the complex, simple.

I might add recognize that virtually all innovation comes from the periphery and captures the center, or makes itself a new center, skipping the ‘middle’ whose honorable task is to expedite what the center considers important, but with no real capacity for invention of its own. As someone remarked at question time perhaps we put too much emphasis on persuading the academy rather than simply circumventing it and creating one’s own new center(s).

It was a wonderfully stimulating day, skillfully guided by Mark Vernon, and at its heart perhaps was asking us to learn the most fundamental imaginative and contemplative skill we can bring to every and any experience (however mundane, imaginative or anomalous), the reflexivity that makes us aware of being aware, that the person watching the scenery from the tower is, also, able to observe themselves watching, such that we genuinely greet every experience fully alive to its considered reflection in our receiving hearts and minds in all its myriad dimensions.

The day was a collaboration between The Scientific and Medical Network, The Centre for Myth, Cosmology and the Sacred and Perspectiva, with support from The Fetzer Institute.