Barfield, incarnation and the evolution of consciousness 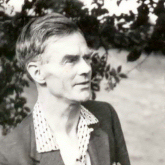 This piece was published in the Church Times a month ago, and so can now peak from behind the paywall. It is also the last piece of mine edited by Rachel Boulding. She much improved many of my efforts.

Jesus can be understood in numerous ways. His first followers, still Jews, reinterpreted the Messiah traditions to see Jesus as a suffering servant-king. Later Christians turned to Greek traditions to fill out the intuition of Jesus as the incarnation of the Word, or Logos.

The Inklings, the illustrious Oxford group that included C.S. Lewis and J.R.R. Tolkien, were fascinated by the capacity of the imagination to convey truth, particularly in great stories and myths. It was this discussion that allowed Lewis to become a Christian, when Tolkien convinced him that the historical life of Jesus was a true myth. But there was another Inkling, whom Lewis met before Tolkien, who must have prepared the ground. He was Owen Barfield. Lewis showed his great debt to Barfield in many ways, not least by naming the children in his Narnia stories after Barfield’s children.

Barfield was a Christian too, though he tended to draw on evolutionary ideas to unpack his faith and, in particular, the evolution of the meaning of words. His insights are particularly resonant during the reflective season of Lent.

He treated words as fossils, though fossils of the psyche rather than physiology. The shifting meaning of words could be studied to retrace the shifting evolution of human consciousness. He noticed, along with thinkers as different as Ralph Waldo Emerson and Jeremy Bentham, that words which are now used to describe an inner state of mind had formerly been used to describe things in the external world. Upright, as in an upright life, had originally meant straight. Transgression, as in committing a sin, had originally meant crossing a line. Superciliousness, as in haughtiness, refers to raising the eyebrows.

Barfield concluded that there was a clear direction of travel in the evolution of words, and so therefore also of the human consciousness that uses them. It was from the outer to the inner; from the material to the immaterial.

A particularly fascinating case, explored in an essay entitled Philology and the Incarnation, now part of a collection of Barfield’s essays published as The Rediscovery of Meaning (The Barfield Press), is that of the word “spirit”. In ancient languages such as Hebrew and Greek, it had first meant “wind”. Further, it is possible to pinpoint the moment when it had meant both spirit and wind. Consider, John 3:8. “The wind blows where it chooses… So it is with everyone who is born of the Spirit.” (NRSV). In the original Greek, the same word is used for both wind and spirit: pneuma.

So how had the writer of John’s gospel originally experienced the observation? What for us is separate and outer, the wind, was presumably merged with what is, for us, inner and integral: spirit. The author appears to be poised between an older sense of being in the world, that is open and porous to things like spirit and wind; and a newer sense of being in the world, that has a subjective, increasingly individual awareness things, and so can begin to sense the inner workings of spirit.

It is highly significant that the gospel writers lived during the period in which the objective and the subjective were being differentiated in this way. The language of material things was being redeployed to express feelings and states. The enchanted cosmos, filled with entities and forces that might aid or hinder you, was coming to be known as a lively inwardness too. The practice of sacrifice, which had long been focused on restoring the relationship between gods and creatures, was reimagined as an attitude of offering one’s life to God. An individual might no longer wrestle with angels but seek desert places to quieten their minds and so find God within. A crucial shift in the evolution of human consciousness, Barfield explains, was reaching its culmination during what we now call the turn from BC to AD.

Barfield calls this new sense of individuality a “spiritual selfhood”, a sense that the dynamics which had previously been imagined as dispersed throughout nature and the cosmos were now relocated and active inside the psyche, giving rise to a fuller sense of personhood, with a separate will and desires. It’s an insight that explains why, for example, ancient Hebrews had not been concerned about an afterlife, because you need a strong sense of individuality to be worried about personal survival; and had conceived of the Messiah as an earthly king not the figurehead of a kingdom in a different realm found within you.

Jesus of Nazareth was the first person in whom this new experience of being human flourished perfectly and completely. He knew himself to be an individual and fully human; and also entirely transparent to the life-principle of the cosmos, the Logos, and to the divine, and so fully God. Hence, he taught people to pray privately; that the key Lenten task of metanoia, usually translated as repentance, is cultivating a new direction of mind; and that it is not what goes into the body that now counts, but what comes out – or as Lenten writers often counsel, doing something positive.

Barfield concluded that his study of the evolution of human consciousness, through the history of words, would probably have led him to propose something like the incarnation during the first century. But his link between the incarnation and the evolution of interiority illuminates this pivotal moment in a distinctive way. He stressed that the truth of Jesus’ life is found most intimately not in processes of reasoning, as Lewis had undergone, or in efforts to recover the historicity of events. It is found directly in an awakening to the mystery of knowing of one’s unity with God.

It’s the understanding of Jesus expressed by Athanasius: “The Son of God became man so that we might become God.” The incarnation is an event in history but it is also a timeless truth about ourselves “giving birth” to God in our inmost being, as Meister Eckhart wrote. Jesus put it this way, when he promised his followers that they could know themselves as both individuals and, inwardly, as kin of God: “On that day you will realise that I am in my Father, and you are in me and I am in you.” (John 14: 20).