The real meaning of Christmas 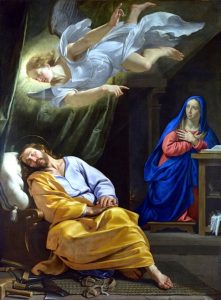 This piece is published at Christian Today and The Idler.

Many Christians will feel compelled to proclaim a social message this Christmas. How could they not? The story of a refugee family, with a tiny child, travelling across borders, fleeing hostile regimes seems irresistibly relevant in the modern world. Poverty and homelessness seem self-evidently integral to the Christmas story.

And yet, this interpretation worries me. Further, I think that in the long run it is probably counterproductive.

My concern arises because I fear it misses the essence of the events in Bethlehem. That essence is crucial because it’s the element that might not just help but catalyze a genuine transformation in human hearts.

Part of the problem is the very power of turning the story of Mary, Joseph and the baby to highlight the distress of others today. Images of lost young children are immensely poignant. When published in newspapers or on social media they stir the emotions and demand an emotional response. They are deliberately designed to overwhelm and rend hearts.

And isn’t this right, those who post them might say? The suffering of innocents is appalling. Their cries reach to the heavens.

That is absolutely right. But there’s a risk. It’s as if all we are allowed is a disturbed response. The Christmas story becomes a well-meaning slogan. It bullies us into guilty submission. It leaves most in a state of incapacity and eclipses the essence of the story, the element that might make a difference.

For it seems to me that the birth of Jesus is precisely not about the continuation of human struggles by other means. It is not about the perennial effort to redistribute wealth, bring justice and care for the vulnerable. As Jesus was to say: “The poor will always be with you.” He might have added, as will those who are worried about their wealth.

He wasn’t being callous. The moral battles focused on material wellbeing are as old as humanity. They are to be fought.

But with Christmas arrives a turning point. Jesus was indicating was that his life is about a different kind of intervention. It is not a social programme, but a spiritual transformation.
Clearly, he was not indifferent to the poor or unconcerned about how money distorts. But he focused his ministry on something subtle and profound: our attitudes towards what we have or lack. To quote Jesus again: “Where your treasure is, there your heart will be also.”

He is pointing to probably the most powerful dynamic in human lives: our desires and hopes. He is seeking to prompt an altogether different vision of life. “Do you have eyes to see? Do you have ears to hear?” This question, in various forms, is the most common cry attributed to Jesus in the gospels.

He recognised that our attitudes towards the concerns of this world are formed by how we feel about the next. If we don’t feel that our destination is heaven, if we can’t imagine how this life might be a chance to awaken to the divine reality that sustains it, then we are likely to live a life that revolves around material security, for ourselves and others. He put it like this: it’s not possible to serve both God and Mammon.

He clearly realised that there was going to be a tendency to reduce the kingdom of God to a secular manifesto. How could it be otherwise? It is hard to gain the eyes that can see and the ears that can hear differently. “Be in the world but not of the world,” he prayed for his disciples. “Render to Caesar the things that are Caesar’s and to God the things that are God’s,” is another pithy summary of the teaching.

This is the real struggle, the real fight. It’s an inner battle. It asks of us to realign our hearts and minds to care about spiritual growth. It invites us to attend to eternal concerns. It makes the truly shocking suggestion that it is better not to possess this life because the anxiety the effort demands leaves little energy for anything else.

Divine life, though, is what the shepherds heard singing on the night of Christmas. It’s what guided the wise men by the cosmic star. When sight is lost of this spiritual reality, the good news becomes indistinguishable from the stump speech of any humane politician.

My fear is that in our disenchanted world, this is exactly what has happened. The gospel has become a form of spiritual materialism; politics with Christianized rhetoric and prayers. I wonder if it’s why the sense of hopeless feels like it’s becoming pervasive.

It’s not that Christianity has nothing to say about this life. But what it might say only makes a difference when this life is reframed. It needs to be seen by the light that has come into the world. Ironically, if we did see life by this light, it might be easier to implement the material redistribution that’s obviously required. Indeed, my sense is that it is only by seeing life by this light, and so loosening our preoccupation with material growth, that the world might hope to address the problems it faces.

So there is a clear message in the Christmas story and it’s heard in its essence: something new has come into the world. When that novelty is eclipsed, the light is eclipsed too. The world doesn’t see it and neither do Christians who see and hear the gospel mostly through this-worldly eyes.

That leaves us in truly dire straits. It means there is no radical hope because there is nothing to focus our desires on apart from material concerns. That’s where our treasure is. That’s where our hearts are. There is no vision that can sustain us through the terrible tragedies that will become more frequent in the years ahead.

Don’t get me wrong: the social problems of this world are real. People are suffering and we should be concerned because we are human too. But for people with spiritual sight, there’s another recognition: we do not live by bread alone. We need to relearn what it is to live by the living words that come from the mouth of God. This is the transformation signaled by the new life of Bethlehem. I hope it brings hope this Christmas.