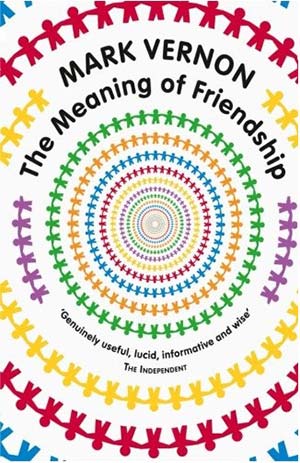 A heavy burden is placed on friendship. We turn to friends for our happiness. Some say they trust friends more than family. And there are those who want to marry their best friend – a very novel idea. Then, in the networked age, we believe, or hope, that friendship is elastic enough to connect us across the web of complex lives, and strong enough not to snap. But is it? For whilst friendship offers much, few ask about its perils and limitations, as well as its promise.

Mark Vernon examines the love shared by friends, linking the rich insights of the great philosophers of friendship with numerous illustrations from modern life to ask about friendship and sex, friends at work, the politics of friendship, and its spirituality. In this new version of his book, previously published as The Philosophy of Friendship, he explores how notions of friendship may be changing because of the internet. He also has a new chapter on self-help and friendship, challenging notions of friendship that arise from evolution and psychology.

‘For twenty years I have been waiting for a book that exposes the empty certainties of religious fundamentalism and its secular twin: scientific triumphalism. Mark Vernon has delivered that and much, much more.’
- Mark Dowd, broadcaster and film-maker

‘In secular, consuming society nothing is more urgently needed than a cogent, passionate justification of those values we hold most dear in spite of everything. Mark Vernon passionately justifies friendship as a value lying at the very heart of what we are. This is a book that will make you feel better about being human.’
- Bryan Appleyard

‘Mark Vernon’s book will change the way you think about the people you see every day – at work, in your street, in the pub, at home. He helps us to appreciate and to nourish many different kinds of friendship.’
- Sophie Howarth, The School of Life

‘A history of the idea of friendship through the works of various thinkers from Plato to Nietzsche. It’s genuinely useful, lucid, informative and wise.’
- Mark Simpson, The Independent, Books of the Year

‘A wonderfully thoughtful and timely reflection on the importance of friendship in helping us become honest, courageous and wise.’
- Stuart Jeffries, The Guardian

‘A very readable mix of self-help and technical philosophy, this inquiry explores the potentially detrimental effects of dissimulation, sexuality and the workplace on friendship, as well as looking more generally at the political and ethical issues. Ultimately, Vernon argues that in its purest form friendship is a way of life. Indeed, like Socrates, he believes philosophy and friendship have much in common: they are both founded upon the love that seeks to know.’
- PD Smith, The Guardian

‘Everyone will learn something of value by reading this book, whether their primary interest lies with friendship or philosophy.’
- Julian Baggini

‘A wise and accessible discussion of the perils and promise of friendship.’
- Ray Pahl

‘Mark Vernon is the best kind of friend of friendship.’
- Anthony Price

Extract from ‘The Meaning of Friendship’

For a long time I was single. I relied heavily on friends for company, support and affection. And most of the time I was happy about that. Implicitly, I agreed with Aristotle: who would choose to live without friends even if they had every other good thing, he said. Moreover, I regarded myself as exceptionally lucky with my friends and still do.

But for all that, I was often alone and sometimes lonely. The friendships I enjoyed only went so far.

The limits were most obvious when compared to the relationships I witnessed between lovers or within families. It seemed to me that notwithstanding the occasional exception, friendship simply cannot bear the demands and intimacies, great and small, that are the very stuff of these other relationships of love and blood.

This set me thinking because my experience seemed very different from the way friendship is portrayed at a cultural level. Here it is frequently heralded as nothing less than the defining relationship of our age. In TV soaps, the characters always have their friends to return to when their sexual adventures fail; lovers come and go, but friends remain. Or, according to agony aunts, friendship is the ingredient that makes partnerships work (a suggestion that would have surprised many of those same agony aunts; aunts who might have suggested the ingredient of partnership to make relationships work). For sociologists, a common assumption is that friendship is now most people’s relationship of choice, and people often see their friends in opposition to traditional relationships of obligation: as marriage and family flounders, to say nothing of lifestyles becoming more mobile, the belief (or hope) is that friendship will carry them through the serial monogamies and speedy pace of life. And for politicians, the idea of civic friendship is also gaining ground. Here the thought is that democracy can be revivified by a notion of citizenship that includes a concern for others’ wellbeing. Such civic friendship would counterbalance disparities between rich and poor, and an individualism that seems so pervasive, as well as provide a way of humanising a civic space which is often otherwise about the exercise of freedoms, an obedience to rules, and a claiming of rights.

All in all, friendship is conceived of positively, as the new social glue to paste over-networked lives: because it is ideally structured to cope with the stresses and strains, great and small, that modern life throws up, it will stop them falling apart. But will it? My experience told me that whilst friendship can be great, its affections and commitments are often ambiguous. When a lover calls they automatically get first priority and family commitments are, well, family commitments. So perhaps the soaps are romanticising friendship, the agony aunts are falling back on it too fast, and the sociologists and politicians are being overly optimistic?

In Our Time, BBC Radio 4, on friendship

Podcast: ‘What is friendship?’