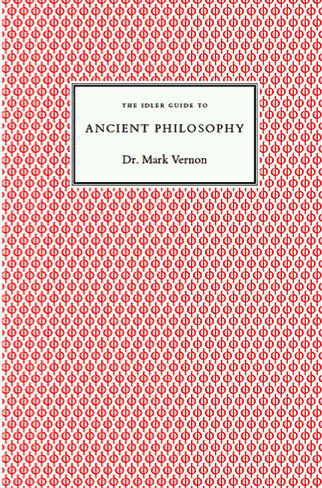 Contents
1. The Prequel: Presocratics
2. Why Socrates? Why the hemlock?
3. Plato, Scepticism, and the God of Love
4. Aristotle on happiness and plots
5. Epicurus and the pursuit of pleasure
6. Going with the flow. The Stoics and Cynics
Appendix 1: The schools of ancient philosophy in one minute
Appendix 2: Some key dates
Appendix 3: Further reading and listening

Our story begins a long time ago in a universe that, psychologically speaking, is pretty far away. It is the age of Homer – of warriors and heroes, gods and monsters. Oral means of communication were the norm, not writing: thoughts were written on the heart before they were transferred to the page. An individual in those times – the undifferentiated years of the tenth, ninth, eighth centuries BC – might have looked at the red sky, the black sea or the green land (ancient Greeks had no word for blue) and felt a flood of meaning washing from the hills and waves. The experience was unlike a modern mentality in which we spontaneously turn inside seeking insight in introspection.

There was, as yet, no clear distinction between inside and outside yourself. Human beings were porous, as the philosopher Charles Taylor has put it. Hence, if you read Homer, you find that his heroes have crises but unlike Shakespeare’s Hamlet, they do not stand on an empty stage and reflect via soliloquy. ‘To be or not to be…’ Such deliberation requires a sense of self that is individual, separate, facing its own unique clusters of pain. Rather, in Homer, a miasma rises up, the scene cuts to gods arguing on Olympus, and the characters of Achilles or Hecuba are played like chess pieces in the game called fate. They have what the philologist Owen Barfield called participatory consciousness. We are therefore I am, not I think therefore I am.

Things began to shift in the first stirrings of what we now call philosophy. The presocratic philosophers were those individuals who began to ask the kind of questions that cause a certain distance to open between the individual and the world in which they had felt immersed. They began to create a mentality that feels more familiar to us, one that planted the seeds of the modern. We know one of those queries left by Anaxamines of Miletus, one of the earliest philosophers of the sixth century. He thought to blow on his hand in two ways. First, with his mouth wide open. Then, with his lips pursed. He noticed a difference. Try it.

When blowing with his mouth wide open, the air felt warm. With his lips pursed, it felt cold on his hand. And then he thought to ask why?

That small question represents a massive leap of mind. It wonders if the difference might have a physical reason, a proto-scientific explanation. We now describe the effect as a result of Boyle’s law. The air from pursed lips feels cooler because it undergoes a rapid expansion as it leaves your mouth. That takes energy, so the temperature drops. The air from an open mouth undergoes no change of pressure, and so emerges still warm, at body temperature.

But there is something more subtle going on in Anaxamines’ ‘why’ too. The effect of asking is to distance you from the experience itself. Part of you has the experience of warm and cool air hitting your palm. But now, another part of you takes an inner step back and reflects on the experience. That inner shift is symptomatic of the new way of engaging with life that was emerging at the time of the presocratics. It is that change of consciousness they can be said to have helped crystalize. It is as if alongside life known as a series of fateful events, a deeper truth may be found by turning inwards and reflecting. Introspection had begun.

It carries benefits and costs. One big benefit is that sciences can get going. The presocratics are remembered for coming up with questions we still ask, such as what the world is made of, can I predict whether it will rain tomorrow, do living organisms evolve? Their answers, like ours, also made them more capable of manipulating the world. The change put power in their hands. Another early philosopher, Thales also of Miletus, was such an astute observer of nature that he was able to forecast that next summer would be particularly good for olives. His new science gave him the confidence to buy the rights to license olive presses. Next summer came and he made a killing, because he was correct. Everyone had to pay him a small tax to capitalise on the bumper crop.

But there is a cost of prioritising this more analytical, manipulative form of consciousness over a participatory one, too. It is separation. Hence, Barfield labeled this new phase of life, alienated. I now have the sense that there is a distance between myself and the world, one that feels difficult to bridge because I regard myself as an isolated subject, an ‘I’, in a universe of objects, or things. The shift from an oral to a written culture has a similar effect. Put words on a page, and you cause the illusion that they have an abstract, virtual existence; no longer living in the heart but on the page. What they describe need not be intimately tied to our experience. Hence we know Hamlet as an artifice, a fiction. Homer’s hearers must have felt his heroes existed, in some archetypal way. Similarly, we no longer live with the supposition of oral cultures who see words in the landscape, aboriginal meanings in the stars and clouds. Hereon, philosophy runs the risk of seeming to conquer all mysteries ‘by rule and line’, to recall Keats’ lament for those lost times.

The effects of these changes in the presocratic era have evolved over the centuries, responding to socio-economic as well as ideological developments. For example, whilst Thales thought to capitalise on his new knowledge, it was not until the early modern period of the seventeenth and eighteenth centuries that science and technology became the raison d’être of entire societies, in the industrial revolutions. Alternatively, it was the conditions of the nineteenth century that generated a new kind of human being, the atheist, who concluded there was a fundamental gulf between the worldview known as scientific and that known as religious. An ancient philosopher, upon making a discovery, would have thought it entirely sensible and appropriate to offer a sacrifice in the local temple. ‘Everything is full of gods,’ Thales the meteorologist also delighted in declaring.

None of the ancient philosophers felt it necessary to ask whether there was a meaning to life either. If anything, they struggled because life was too full of meaning. They did not adopt the assumption that disconnected introspection alone must adjudication on purpose and fulfillment. That took the emergence of an ideal of self-sufficient, self-determining, autonomous individuality. Ancient philosophers, like most humans in history, argued that asking where you are is as valuable a question as asking who you are: they followed the injunction to know thyself rather than the more modern need to make something of oneself.

But nonetheless, the assumptions that shape us now find an early reflection in the surviving fragments of works by individuals like Anaxamines and Thales. Unlike Homer, who always comes across as a bit dreamy and mythological, their inquiries feel familiar. Their take on life is striking because, though two and a half thousand years old, it feels related to our own.