From shame to sin 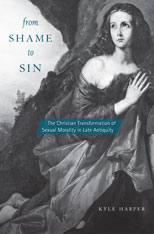 This is a slightly extended review of what I think is an important and fascinating book, From Shame to Sin: The Christian Transformation of Sexual Morality in Late Antiquity by Kyle Harper, first published in the Church Times.

One of the assertions of Christians who claim an orthodox stance on homosexuality is that they are teaching what the church has always taught, namely that same-sex desire is disordered. Kyle Harper’s fascinating exploration of early church attitudes towards sexuality demonstrates conclusively that this conviction is deluded.

The first Christian authorities were thoroughly against same-sex acts, it’s true. Paul’s absolute condemnation in Romans 1:26-27 spawned a sub-genre of polemical sermons and moral stories that provide the raw material for Harper’s historical exploration. By the 390s, Theodosius I was burning male prostitutes on bonfires as a lesson to the public. A century or so later, the standard punishment was dismemberment.

But the key issue is not what the early church condemned but why it was so keen to condemn it. When you understand that you see that the reason same-sex relationships were damned has now vanished. Even conservatives no longer share the worldview that first provoked Paul’s wrath.

When he wrote his letter to the Romans, Paul pinned nearly all that was wrong with Roman polytheism on the empire’s sexual morality. Harper shows that he had good reason to do so. The world into which Christianity was born was a slave economy. In particular, you could call yourself free if you could do what you wanted sexually with your body and with others’ bodies.

Paul, though, discovered another kind of freedom. It was based not on bodies but on wills. The new freedom to be found in Christ was about the transformation of your mind, an entirely different sense of liberty, which is why Paul wasn’t interested in reforming the slave economy and didn’t become an abolitionist. Rather, early Christianity dramatically transcended the socio-political sense of freedom with the psycho-spiritual notion of free will.

To put it another way, early Christianity turned the notion of shame, a type of social opprobrium, into sin, which is judged not by your fellows but by God. Hence the title of Harper’s book.

The condemnation of homosexuality and, in fact, all sexual acts save those that were necessary to procreate, followed because to indulge in them was gratuitously to exercise your freedom as if you were rejecting the new freedom of mind and will to be found in Christ. This is what Paul focused on. To have such people in your congregation was to pollute the body of Christ, as he explains in 1 Corinthians 6, because it corrupts the new person Christianity invited you to become.

Nowadays, the slave economy has gone, at least as an official policy. In a liberal society, no-one has the right to anyone else’s body. Similarly, the church no longer teaches that the best sex is no sex, as it did for its first 1500 years. Those who adhere literally to Paul’s injunctions have, therefore, lost sight of the spirit of the gospel. Christian freedom, based upon will, is now commonly expressed in the notion of consent, and so we recognize something that Paul would have thought hopelessly compromised, although paradoxically it is his vision that inspires it. Love is the basis for sexual relationships, not ownership. Celebrating sexual love is now to witness to the freedom to be found in Christ.

Kyle Harper’s book should be compulsory reading for all who are engaged in the latest attempt to settle the Church of England’s teaching on sexuality. They will be reading their Bible’s blind without it.